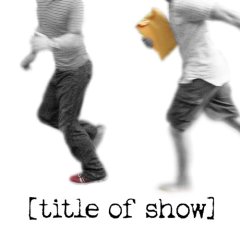 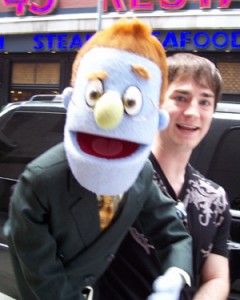 The show celebrated their Broadway arrival this afternoon as the Lyceum Theatre box office officially opened with a Ticketganza. There were half price tickets, free rice krisipe treats and lemonade, free cast recording CDs plus the cast was on hand to sign those CDs. Rod and Trekkie Monster from Avenue Q were on hand to show support as well ([title of show] and Avenue Q have the same producers). I got a quick photo of Rod as he, along with his human counterpart Jonathan Root, was passing by entertaining the ticket line.

I also came away with a couple of those half-price tickets. We’re going to [title of show] during it’s first weekend on Broadway… Sunday, July 7 to be specific. We’d wanted to see the show when it was off-Broadway but could never make that work out, so we’re excited to see it in just a couple of weeks in its new home.