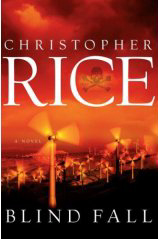 Why? Why is this book so uneven?

I’ve been a big fan of Christopher Rice’s since he published A Density of Souls back in 2001. His style is typically a thriller with just a tinge of supernatural.

There’s no supernatural or even a solid thriller in Rice’s latest, Blind Fall. There is a murder mystery. There is a gays-in-the-military theme, although that doesn’t really go anywhere. There’s some family woes thrown in here too. The sad thing is it doesn’t hang together well at all. It’s a bit too forced and a bit too contrived.

The book started out good as we met Marine John Houck on the battlefield in Iraq and his rescue of his friend and captain Mike Bowers. However, as things proceed–finding out why John was distracted that day in Iraq and then, jumping forward a few months, his discovery of Mike’s murder scene–the plot starts to unravel. Rice tries way too hard to make ever single piece of plot stick to another. Often it left me asking: So you’re tying point A to point B like that?

The biggest problem I had is that it was impossible to be emotionally connected to anyone because no one seemed genuine. John has so many demons, he doesn’t know how to behave naturally. Alex, the guy he’s trying to save from being framed from murder, almost won me over… but then he went and did some truly off-the-wall things. At the end, I though I found someone having a genuine moment, only to get burned by one of those moments where Rice Crazy Glued the sub plots together.

I guess not every book can be a winner. Hopefully Rice will do better the next time out.