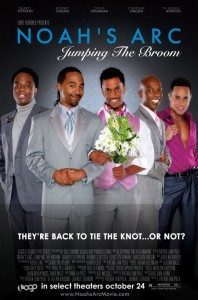 Will and I were both of fans of Noah’s Arc for the two seasons it ran on Logo. We were disappointed when the show was canceled seemingly out of the blue, but were excited when it was revealed the show was making the jump to the big screen. Noah’s Arc: Jumping the Broom went into limited release this weekend. Yes, it was worth the wait for the movie.

The thing that made the series so good was the tight friendship between Noah and his friends–Alex, Ricky and Chance–as well as Noah’s romance with Wade. In the film, Noah and Wade arrive at Wade’s family home in Martha’s Vineyard to get married.

As you can imagine, getting this gang to execute a wedding provides many laughs. We got a small glimpse of this in the series when Chance married Eddie, but this time it’s on a much larger scale. Alex’s efforts to pull off the perfect wedding shows the lengths a friend will go to, but it’s also quite funny too as he tries to make everything from the outfits to the cake to all the food.

All the relationships are having issues during the movie too. Eddie and Chance, after four years, are questioning if they’re still in love with each other. Alex and Trey, after 11 years and running a business together and adopting a daughter, are trying to figure out how to keep their relationship together. Even Noah and Wade have issues on their weeding weekend as things come to a boil with Ricky’s unrequited love for Noah.

There’s also a touch of Broken Hearts Club here as the friends take Brandon under their wing. Brandon is 19 and ended up coming to the wedding with Ricky. Soon he finds out he’s just one of Ricky’s many tricks, but he ends up getting and giving some sage advice during the weekend.

I’m not sure if there’ll be more Noah’s Arc films, or if maybe it will go back to Logo. I am glad there was this opportunity to see more of the gang’s story.