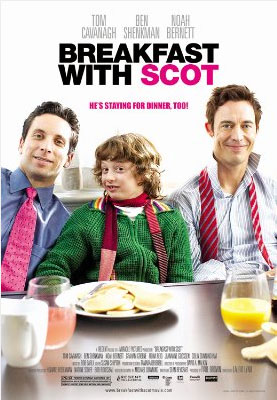 Breakfast with Scot has been on my radar since February 2007 when I heard it became the first gay themed film to get approval from an NHL team to use its logo. Last spring I read the Michael Downing novel the film is based on. Over the weekend, I finally saw the movie.

The quick synopsis of the story–two men end up caring for a boy whose mother, who is the former girlfriend of one of the men’s brother died–is in tact from the book. Scot is just as quirky in the movie as he was in the book. However, the movie diverges significantly from the novel in that Eric (played by Tom Cavanaugh) is a former Toronto Maple Leafs player and now a sportscaster and his partner, Sam (Ben Shenkman), is an attorney.

Scot (played wonderfully by Noah Bernett) is just as free-spirited as he was in the novel. He arrives with a case full of costume jewelry, is happy to go around the house singing random Christmas carols (even in October), wears makeup to school and in general refuses to conform. He’s also very adept at making friends, even with the kids who initially want to pummel him because of his differences.

Then there’s the hockey, which isn’t a plot point in the book at all. Eric teaches Scot how to play, which goes over with very mixed and funny results. Since the movie is set in Canada (the book is in Boston), I guess the filmmakers decided it could benefit by having some hockey in it. It was a nice addition, though not entirely needed.

While I did like the movie a lot (even though a lot of US critics didn’t), I did have two issues: 1) A subplot revolving around how out Eric is at his job is sloppy and resolved too quickly with one line. As stressed out as Eric is about being found out at work and by fans, the film sweeps this away too easily. 2) Eric and Sam, who have been together four years, don’t behave like a very loving couple. They kiss only once at the end of the movie and they never seem completely comfortable with each other even though it’s clear they are attempting to make a good life together. They were certainly happy and content in the book; it just didn’t come across on screen in the same way.

Overall, as I wrote, I did like the movie. It was perfect for a winter afternoon, curled up on the couch. The DVD is currently available and it is airing on Here! this month.