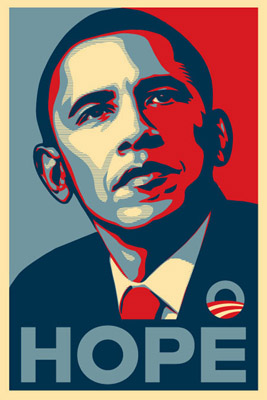 In just a few hours Barack Obama will be inaugurated as the 44th President of the United States, thus bringing to an end eight years of Republican control.

Given Obama’s platform of hope, I’ve got this list of hopes for his presidency:

I hope Obama and his team are able to turn the economic crisis around quickly. I realize quickly for the economy can mean months or even years, but lets hope we can see some light at the end of the tunnel soon. Let’s learn from the mistakes of deregulation too. Just because a bank can profit by lending to people who shouldn’t have credit doesn’t mean it’s a good thing. Let’s focus on the overall economic health of the country and the world ahead of short term profit.

I hope Obama sticks to his “era of responsibility” message. The government needs to hold people and institutions responsible for their actions that affect us all (the fact that banks got billions in TARP funds that they seemingly don’t have to be accountable for is reprehensible). Responsibility extends to how we take care of each other too. I like that Obama set the tone yesterday as he and his family volunteered around Washington. If everyone did some sort of volunteerism, think how much stronger our communities and country as a whole would be.

I hope Obama can change the US perception around the world. The Bush administration destroyed our good reputation by turning the US into a bully. Governments of the world need to work together for change, rather than individually. That working together extends to keeping the world safe too. There are still bad, evil people out there looking to create destruction and chaos. The countries of the world, perhaps led by Obama and the U.S., need to come together to bring those people to justice.

I hope the US can return to a time of embracing the diversity. Post 9/11, Bush worked to get us to live in fear of anything that was deemed different. At times the fear mongering was so intense that any viewpoint that was different from the administration’s was considered unpatriotic. As FDR said, the only thing we have to fear is fear itself. We need to get away from leadership that leads with fear.

I hope Obama can extract us from the wars we’re in. Bring the soldiers home to their families before any more are killed. I know, like fixing the economy, this is not something that can happen overnight but lets get it done as quickly as possible.

I hope the new administration (both Democrat and Republican) can lead America to being a beacon of hope, prosperity and freedom. In many ways other countries have advanced human and civil rights for their citizens, leaving America to play catch up. Let’s get our leadership position back.

Most of all, I hope Obama proves to be a leader who will stand up for what’s right rather than what’s popular. It’s not easy to be a leader who fights for right when there are powerful and rich political machines working for their own interests rather than the country’s. I fear this is a quandary Obama will face a lot and I hope he’ll be able to do the right thing for the sake of our country and future generations.

A lot rests on Obama for at least the next four years. I’m looking forward to his speech today to see what he lays out for us.