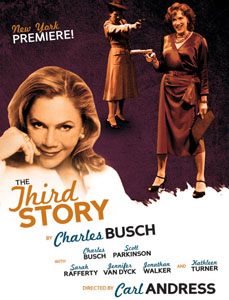 We spent Valentine’s Day afternoon with Charles Busch and Kathleen Turner as we took in the New York City premiere engagement of The Third Story.

As the title suggests, there are three stories told in this two-hour comedy.

There is a mother/son screenwriting team, played by Kathleen Turner and Jonathan Walker. Turner has come to Omaha to talk her son into coming back to Hollywood to resume their partnership. While they argue about why he’s not going back to Hollywood, she ends up writing the beginnings of a new script…

… Which deals with a lady mob boss (played  by Busch) who forms an alliance with a scientist (Jennifer Van Dyck) who has found the magic formula to allow cloning. The lady boss is sick and wants to assure her future, even though the scientist hasn’t been very consistent in producing quality clones.

Meanwhile, in the third story, a socially inept princess makes a deal with a witch (again, Busch) to help assure her future, although the results aren’t exactly what she was expecting.

There’s a lot more that goes on in each of these stories, but I don’t want to give away anything.

Each of these stories weaves it’s way across the stage seamlessly with nearly all the actors taking on two roles. The results were completely hysterical. My favorite of the three was the kooky cloning story. With the play set in the 40s, you can just imagine the cheesy sci-fi/gangster movie this script could become.

The photo below shows the seamless nature of the scenes. Here Turner is in writer mode, imagining the scene Busch and Walker (here as the mob boss’ son) play out. 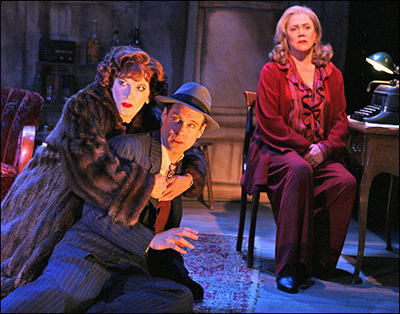 The Third Story was a great way to spend the afternoon. It was a laugh from start to finish. Having see it, it was no surprise the show has just been extended two more weeks, though March 15 at the MCC Theatre at The Lucille Lortel Theatre. Here’s a bit more of the show with this MCC promo video.