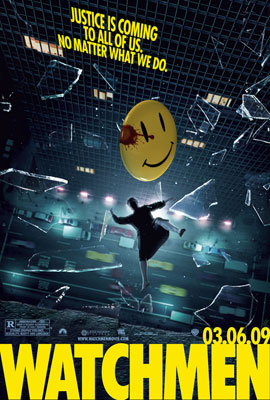 I’ll say up front that I had little experience with Watchmen before I saw the movie this afternoon.  I was aware it was a graphic novel that had a sizable following, but I didn’t know the characters or plot. What little I knew came out of the trailers and the media coverage.

I liked the movie a lot. It was a little heavy-handed/preachy in the final reel, but on the whole I thought it was cool, engaging, thought provoking and more than a bit disturbing.

The alternate universe 1985 was an amazing construct. There were many cues to put us in that time: early MTV (Robert Palmer’s “Addicted to Love”), the World Trade Center in the skyline, a billboard for the original production of 42nd Street and  a very dark/dirty New York City. What’s jarring is the fact that Richard Nixon is still in the White House, a result of the US actually winning Vietnam. Plus there are superheros in forced retirement, the result of  a Nixon order.

Yes, the film moves back and forth a lot, which I know doesn’t fly with everyone. I thought the moves from present to past was seamless and easy to follow. I liked seeing the backstories rather than just having a bunch of exposition. The one thing I found odd was that Nite Owl didn’t really seem to have backstory.

I liked these characters. Flawed superheros are compelling. For all their powers and desire to do good, they are still human and make bad choices, sometimes catastrophically bad. As I said, I found the last reel of the film to be  bogged down. The explanation for why everything happened was not quite satisfying. I understood the deed, but didn’t quite get the motivation.

I loved the dark tone. It was in the same vein as The Dark Knight, although at times darker still and a lot more gory. That was no big surprise given how much blood there was all over Zack Snyder’s 300.

One late that really struck me, given the current state of affairs, came in a flashback where Nite Owl and The Comedian were out to break up a riot. Nite Owl asks what happened to the American Dream and Comedian’s response was that they were standing in the result of it. Interesting how that same line could be applied to the real world here and now: the greed and mass spending has caught up with us all and spiraled out into the extreme recession we are now in.

Anyway, I know from the press coverage that Watcmen is a polarizing movie. I’m firmly in the camp that enjoyed it.