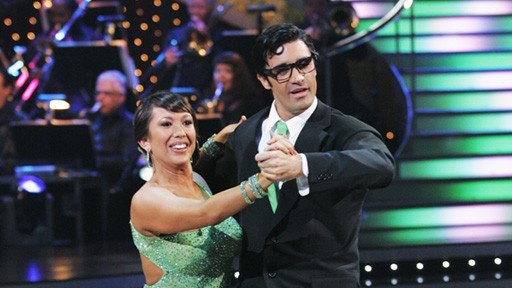 It was a pretty good second week for Dancing with the Stars as quicksteps and salsas made their way across the floor. Sadly there was more injury with Steve-O out for the week (more on that below) and Gilles dealing with a separated shoulder. Here’s my rundown of this week’s dances.

Holly & Dimitri: (Quickstep) Holly seemed to be moved around the floor by Dimitri rather than dancing on her own. It’s one thing to lead your partner and it’s another to make it look like they are constantly trying to catch up. Dimitri needs to pay more attention to what Holly needs to look good.

David & Kym: (Salsa) Kym danced around David a lot. He talked a big game in the rehearsal footage that we were going to see a true dancer, but the content for him just wasn’t there. What bits he did dance still showed the potential that’s there, Kym needs to capitalize on that.

Denise & Maks: (Quickstep) Very good quickstep. Denise found what she was missing last week and loosened up and got into the dance. She also had great frame.

Belinda & Jonathan: (Salsa) This was so  much better than last week as Belinda let go a little bit more. But it did seem to be all over the place in terms of the tempo. Still, it was good to see her have a good time.

Ty & Chelsie: (Quickstep) What a comeback! Chelsie gave him a new “concentration look,” which involved a smile. She also apparently got him to loosen up just right because the quickstep was fluid and had some grace in it. He just might survive this competition after all.

Shawn & Mark: (Salsa) Shawn has spent too much time hitting precise gymnastic moves to really cut loose with the salsa. She tried, but those hips just didn’t move enough. The dance, however, was still good because she hit the rest of the moves just right.

Steve & Karina: (Quickstep) There were some moments of decent dance here, but it was mostly another mess. I think he will be the one to go tonight.

Lawrence & Edyta: (Quickstep) When he was in one spot to do is footwork I thought he was okay, but anytime he started to move around the floor it was just too clunky. I thought the judges let him off easy.

Steve-O & Lacey: (Salsa) Poor Steve-O he got hurt during rehearsals and then got hurt worse during the final dress rehearsal just two hours before the show. So, we judged his dress rehearsal dance. I think Lacey went down the wrong path here like she did with some of her early dances with Lance… not enough content and too much gimmick.

Lil’ Kim & Derek: (Quickstep) This was great! She was far more graceful than I was expecting. There were some issues with her frame and their hold as a couple, but Derek created great choreography and it was very well executed.

Melissa & Tony: (Salsa) By far the salsa of the night! Melissa showed what she had last week, picking up the Waltz so quickly. This week Tony created a hot and swinging salsa that they both totally nailed. The other couples doing the salsa should’ve taken a lesson.

Gilles & Cheryl: (Quickstep) This was the quickstep of the night (edging out Lil’ Kim by just a bit). Gilles played Clark Kent/Superman to perfection and he nailed Chery’s choreography. It was  a fantastic dance to close out this week’s performance show.

Bottom two: I think it’s going to be the two Steves.

Results Show Update: I’m shocked! Belinda is out. So unfair. She’s not great, but Steve’s dance is much worse. Meanwhile, the highlight of the show was Jewel’s gorgeous rendition of “Somewhere Over the Rainbow” with the beautiful dance from Dimitri and Chelsie. The Stars of Dance was also good, but I have to say it didn’t really make me think of Busby Berkeley either (but wasn’t it cool to see Mickey Rooney on hand!).