Friday Geek Out: The Goodbye Girl 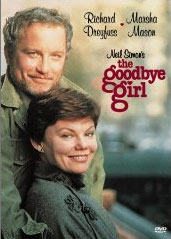 Neil Simon’s 1977 The Goodbye Girl is one of the most perfect movies I know. Yes, it’s a pretty simple romantic comedy: Girl meets boy / girl hates boy / girl grows to love boy / girl nearly has heartbroken / girl finds true love. The excellent cast and sublime writing make this one for the ages (and one of the few comedies to attain Geek Out status).

The movie opens introducing us to Paula (Marsha Mason) and her daughter, Lucy (Quinn Cummings). Paula has no luck with men–they are always saying “goodbye” to her. The latest goodbye is a harsh one, not only did the man leave, but he sublet the apartment out from under her too. She only finds this out when Elliot (Richard Dreyfuss) arrives with a key to trying to get in. Needless to say this is not a good way to start any relationship.

Here’s a couple of quick clips from the movie so you can get an idea of this excellent film in case you’re already not familiar. Here’s the trailer:

And here’ s one of the truly excellent examples of the head-butting between Paula and Elliot that takes place shortly after he moves in to the apartment.

What I love about this movie is the chemistry between Mason and Drefyuss. Even when they are arguing with each other, there is an great interplay between them and it all seems very authentic. As they fall in love, that chemistry goes into overtime making this a great date movie, a great Valentine’s Day movie or just a nice movie to curl up on the couch with the love of your life to enjoy.

I also think this movie fueled my love for Gilmore Girls. The relationship (and dialog) between Lorilei and Luke has a similar vibe to Paula and Elliot, and Paula and Lucy have parallels to Lorilei and Rory.

There have been some attempts to recreate the magic of this film. In 2004, TNT did a made-for-TV version starting Jeff Daniels and Patrica Heaton and it was pretty dreadful. The chemistry between those two was nowhere near Mason and Drefyuss. There was also an attempt at a Broadway musical, which ran February to August 1993. The show used a Neil Simon book along with Marvin Hamlisch music and David Zippel lyrics. The chemistry wasn’t quite right here either as Bernadette Peters and Martin Short stepping into the lead roles. The show was nominated for five Tonys, but wasn’t a critical darling by any stretch and easily lost to Kiss of the Spider Woman in most categories. These failures just go to show that you really shouldn’t mess with a classic.