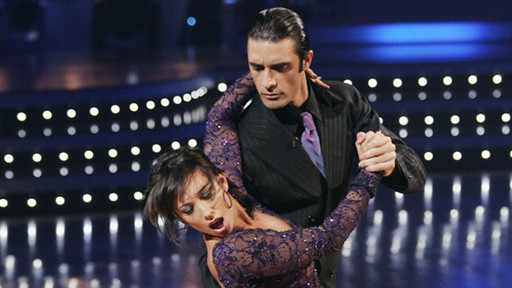 Last season, in week five, Dancing with the Stars broke out of their routine and introduced four new dances: West Coast swing, the hustle, salsa and the jitterbug. It provided a mostly bumpy week in the competition as the pros and stars both had to learn something new. This season it worked a lot better with the Lindy Hop and Argentine Tango. The pros all seemed comfortable with what they were teaching while the stars came through looking pretty good too.

David & Kym: (Lindy Hop) Finally a dance I like him in. First off, the had a great song with the American Bandstand theme. Despite what the judges said, and even with the couple of missteps I saw, I think this was his best dance. It was fun and he executed it great.

Lil’ Kim & Derek: (Argentine Tango) Sexy, steamy, seductive, passionate. This was an awesome dance. Derek did some great choreography and Lil’ Kim mostly nailed it. What amazing foot/leg work. It was great to see them get a 10 from Bruno and I though Len’s 8 was misplaced.

Chuck & Julianne: (Lindy Hop) I agree with the judges, Chuck needs to bring it up a level. It’s clear he can dance, now he just needs to cut loose. This dance was the perfect time do it, but he played it a little safe. It was enjoyable, but not stunning like he was last week.

Lawrence & Edyta: (Argentine Tango)  Boring! Edyta did all the work here (and she looked great). His part of the choreography was too easy. I also didn’t think he played the part well. He wore a serious look on his face, but it carried no passion or danger.

Ty & Chelsie: (Lindy Hop) Way to go Ty! He’s really coming into his own. He let go and looked like he had a genuinely good time here. He even held on to his musicality when he and Chelsie were out of hold. She’s doing such a great job with him.

Steve & Karina: (Argentine Tango) I know last week I said Steve had to go,  but I think this week he rose to the occasion as best he could. He did more complex choreography than Lawrence did. Granted he was stiff and didn’t do it very well, but at least he was out there doing something a bit more than just walking around and having his partner dance around him. I wish the judges would have commented on that.

Melissa & Tony: (Lindy Hop)  It was great choreography and decently executed, but I felt like the element of fun was missing. I know the judges didn’t feel that way, giving it two 10s, but something just wasn’t clicking for me here. It was solid, but kind of hallow.

Holly & Dimitri: (Argentine Tango)  Ack. What a mess again. Pros should be banned from using any kind of seating as part of a routine–Steve made this mistake too in his Tango. Chairs remind DWTS fans of is ESPN’s Kenny Mayne who was on a few seasons ago and was eliminated after sitting in a chair for half of a dance. Holly almost fell out of the chair and was stiff the rest of the time. Please let her go in the double elimination…she’s too painful to watch.

Steve-O & Lacey:(Lindy Hop) Sadness. He’s finally well enough to get through the whole routine, but his timing was just off. I really want to pull for him because he wants to succeed so badly, but he’s going to have to go if he can’t nail a dance very soon (like next week if he’s still in).

Gilles & Cheryl: (Argentine Tango)  Wow! We know he can dance, but boy did that tango sizzle. Cheryl gave him fantastic choreography and he nailed it. I agree with Carrie Anne saying that it was hard to tell celebrity from pro. A well deserved 30, and the first 30 of the season.

Shawn & Mark: (Lindy Hop):  This looked like something out of a cheer leading competition. Mark relied way too much on Shawn’s gymnastics in his routine. The footwork was also off; Carrie Ann called it “too heavy.” I’m sure she’ll get back in the top next week if Mark lets her dance!

Bottom two prediction: Steve O and Holly. With the double elimination, that means I’m picking these two to go home too. I really want to see Steve go, but I’m not sure if he can get knocked out quite yet, so these are my picks and I’m sticking with it… but I’ll certainly hope for Woz to get booted.

Results Show Update: Since I watched on DVR and zip over a lot of commentary, I didn’t know it was going to be bottom three but I guess I got it right. I’m thrilled it was Steve that went over Steve O (although as I wrote above, he needs to come through next week) and no more painful Holly! Yay.

I loved the great paso doable demo! I’d never heard that song before, but it was good for a paso and those pros were hot! I’m looking forward to next week for pasos and Viennese Waltzes…my two favorite dances. I expect to be overcome with emotion at least once and hopefully more.