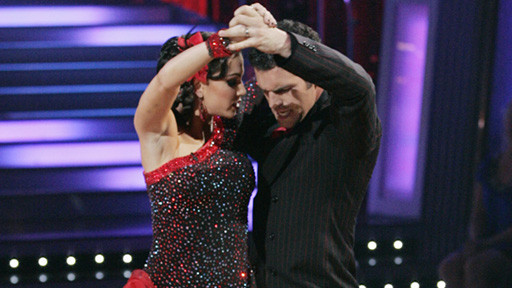 There was a different dance for nearly everyone this week, plus it was group dance flashback to the mod 60s. Here’s a look at this week’s ballroom antics:

Melissa & Tony: (Argentine Tango) For me, the dance that opened the night was the dance of the night. The quick, precision leg and foot work was incredible. (I’m not really sure how the visit to Desperate Housewives played into this… that seemed like the most overt ABC promo ever.) This was a dazzling dance!

Lawrence & Edyta: (Waltz) Why do the judges coddle him? He was stiff and he absolutely got out of balance and almost took them both down. This was a sad waltz and yet he scored decent scores. As Will noted, he is the worst football player DWTS has had. Poor Edyta wrapped up in all that fabric. It’s not right.

Lil’ Kim & Derek: (Rumba)  Gorgeous and sizzling. I was disappointed with the judges reception on this. I thought the restraint made it all the better.  Derek did a good number and it was performed excellently!

Chuck & Julianne: (Samba) His  best dance yet. He executed the dance so good. It was great to see that extra little bit come out and really make it work. Oddly, I didn’t like the choreography. I’m not sure why, but it just didn’t do it for me.

Ty & Chelsie: (Waltz) Yay! Get Ty back in hold and he can dance again. Carrie Ann was right that the look of fear did cross his face again a couple times, but he had no reason for it. He was graceful, had good musicality and delivered a lovely waltz.

Shawn & Mark: (Cha Cha Cha) How fun was that! An adorable dance for the adorable couple. Shawn shines when she has to be precise in a dance, and the cha cha cha let that come through for her. She blended that with a good performance and turned in a great routine.

Gilles & Cheryl: (Viennese Waltz) Cheryl knows how to create awesome dances. I wish Gilles had looked so aloof during the first part. It was hard to get all the romance aspect of it. Still it had all the right stuff a Viennese Waltz should have and it was beautiful to look at even if the emotion wasn’t all there.

Group Dance: The 60s mod vibe was great! The wigs on the women made it hard to sort out who was who at the beginning, but when the got going with their partners it got easier. This was so much better than last season’s hip-hop disaster. Ty had the oddest solo with the bull riding thing. Lawrence had the worst. He looked so uncomfortable, and his attitude during the rehearsal was just pathetic. The rest of the solos were a lot of fun… no real technique there, just fun performances.

The elimination: If they announce bottom two this week, I think it’ll be Lawrence and Ty. If the dance gods are shining it’ll be Lawrence who finally gets kicked out (please, please, let’s not have to hear his attitude next week).

Good show this week. Burn the Floor was awesome. Tom said they were heading to Broadway this summer. We’ll definitley catch that. The dance with Celtic Woman was too reminesent of last week’s Tony and Julianne number, so I wish that could’ve been a bit different.

The voting to get to pick pro dancers is cool. I loved (yes, to the point of tears) the waltz from Mayo and Anna. It was like Cinderlla and her Prince. I’m voting this week for Mayo and Brent.