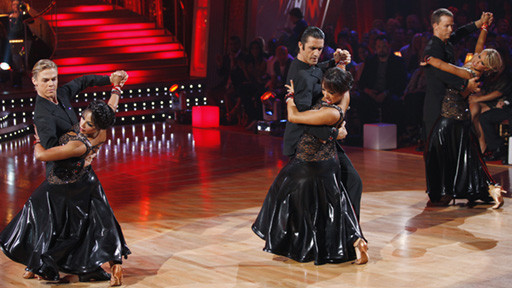 What a great show this week! Ty came out roaring. Melissa was a no-show. The team dances rocked the house! Here’s this week’s blow-by-blow:

Gilles & Cheryl: (Lindy Hop) It was great to see Gilles slow it down a bit and work on his precision. There was a bit of a mis-step in the middle but this was a solid way to open the show and get him back in the judge’s good graces. And, wasn’t Cheryl foul-mouthed this week. She was bleeped a lot between this rehearsal footage and the team Mambo rehearsal footage.

Lil’ Kim & Derek: (Paso Doble)  I’ve been looking forward to seeing Lil’ Kim to a paso since the season began and it was worth the wait. Absolutely incredible! I don’t understand why Len thought she’d be bad at this. Derek deliver fantastic choreography and it was stunning. It was the individual dance of the night.

Chuck & Julianne: (Cha Cha Cha) This was a good routine that Chuck executed mostly well. Every now and then he’d lapse though. It may be his arms that were throwing me off, so I was glad the judges pointed that out. There were times here, however, that he was spot on perfect and that was fun to watch.

Shawn & Mark: (Samba) There was something odd here. Shawn didn’t quite sparkle in this routine. She had it down, but there was something not right here. The choreography might be the problem. It seemed focused on Mark (what was all that shaking he was doing that she didn’t replicate). It’s weird for him to not focus on his student, so I’m just not sure what was up. This was awful or anything, it just wasn’t Shawn at her best. It was cool to see Mark’s mom in the rehearsal footage though… too bad it didn’t pay off better. It was an interesting judges split to with a 8, 9 and 10. So they didn’t know what to make of it either.

Melissa & Tony: (Jive)  Uh-oh. Melissa was hurt and we were stuck watching her rehearsal footage (much like Steve-O earlier this season during one of his injuries). It looked like it was going to be a great number, but since they weren’t performing full out it wasn’t it all it could be. Tony certainly created a good number, it’s too bad Melissa couldn’t pull it together to perform it.

Ty & Chelsie: (Salsa): Go Ty! He’s usually not-so-hot at Latin, but tonight he brought it to the floor with his best dance yet. He was so funny in the rehearsal footage (the spray tan was hysterical) and he brought that fun to the floor. He was so fluid and looked like he had a good time that the couple of mis-steps just didn’t matter. The judges though did ding him for some of the technique issues and dished up another set of split score: 7,8 and 9.

Team Mambo: Lacey (subbing for Melissa), Chuck and Shawn put on a great number. There group work was tight and in sync. Big kudos to Lacey for stepping in at the last minute and picking up on the routine to pull it off flawlessly (that’s why she’s a pro). Shawn got her sparkle back here and she and Mark did a great solo bit. Chuck did a solid solo bit too, but there was something about this choreography that turned them into the weak link in the team.

Team Tango: Gilles, Ty and Lil’ Kim. This team brought the sizzle. Incredible tango. Lil’ Kim lit up the beginning, flanked by shirtless Gilles and Ty,  before she went into her routine with Derek (and why wasn’t he shirtless too…no fair!). Ty delivered again with a tango where he kept his fierceness without becoming Mr. Roboto. Gilles, of course, rocked the tango. It was interesting to watch him and Cheryl because they slowed down for a few beats to add some extra intensity. Plus, their team bit at the end of the number was perfection. It was great to see Ty hold his own against the other couples. One glitch within this presentation, Ty calling Team Mambo “sissies”… that’s such an offensive and derogatory word it was a shame to hear it fall out of his mouth.

Elimination: It gets so hard when  you’re down to six with such potential. Will Melissa go home  because she didn’t show up to show us what she could do? Will Ty go home as the next weakest dancer of the six? Will Chuck, who is the next weakest after Ty, go home instead? Or will there be some massive shakeup (such as when Sabrina was unexpectedly sent home in season five, week six)? I’m going to say Ty. Even though Len said he really brought it for the tango, I think it’s going to linger with viewers that he mentioned it  might be time for him to go.

Results Show Update: Well, it wasn’t a stunner with Chuck going home. It was only slightly out of the order since it should’ve been since Ty is the weaker dancer overall. In some ways though it should’ve  been Melissa. At this late point in the competition you either bring it or you don’t and she didn’t even though she had a good excuse.

I was thrilled to see Mayo back in the pro dance competition. The jive he did tonight with Anna was incredible. He’s getting all my votes this week. I hope he is back next week because it would be fun to see him teach a celebrity from a past season.