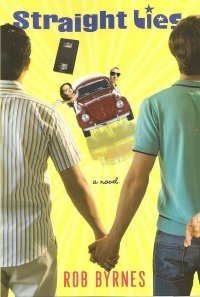 Straight Lies by Rob Byrnes is the fourth novel from Byrnes, who debuted with The Night We Met back in 2002. His last, When The Stars Come Out, was a Lambda Literary Award Winner and is my favorite of his books.

I was excited this spring when Straight Lies came out. Unfortunately, it’s the least satisfying of Byrnes’ books to date. I think the lack of satisfaction stems from the fact that the madcap caper genre is not one of my favorites. That made it hard to get into the book, as evidenced by the fact it took me nearly six weeks to read it.

Here Grant and Chase are lovers and small time criminals, dealing mostly in car and credit card theft. The chance for a bigger score, through blackmail, comes as they find out that big, gay movie star Romeo Romero isn’t really gay after all and there’s a videotape that proves it. Since they can’t manage to get their hands on the video, they decide they need to make one of their own. So Grant, Chase and their gang–girlfriends Lisa and Mary Beth; Jared, a twink who is smarter than he seems; Farraday, a drunk, former cab driver; and Jamie Brock, who once had and lost the original videotape–attempt to trick the movie star into a seduction during his yearly pool party that supports a gay charity. The idea seems foolproof: simply get Mary Beth to seduce the actor. Numerous interruptions make increasingly difficult.

Trying to pull off the blackmail takes the last third of the book and it felt like it went on forever. I know this is supposed to be played to comic effect, but for me the plot was just dragged out as the team had to keep modifying its approach. It’s the kind of story I’d much rather see played out in a movie than to read in a book.

That said, there were things here that I liked, especially the strong characters that Byrnes put together. If it hadn’t been for those, I’m not sure I would’ve finished the story. It was also great that Byrnes took a genre which I usually consider to be a pretty straight one and gave it a great gay spin. There’s no reason that a couple of gay boys can’t be successful petty crooks! The premise around Romeo Romero was also clever: an actor who faked coming out to help his career was a great twist.

Up next: To Love a Cowboy by Rhianne Aile.