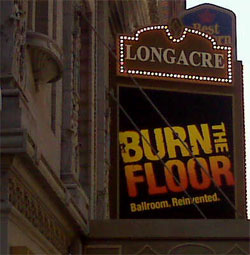 We caught yesterday afternoon’s preview of Burn the Floor, which is playing a limited engagement at the Longacre Theatre. It was incredible.

Twenty ballroom dancers, two singers and a four man band dazzled for two hours. Among the dancers were Dancing with the Stars‘ Maksim Chmerkovskiy and Karina Smirnoff who are in the show until August 16. Burn the Floor features a mix of ballroom styles — cha cha, Viennese waltz, foxtrot, swing, lindy, jive, samba, rumba, quickstep, tango, paso doble and traditional waltz — and there were short stories played out within the four sections of the show.

Just as the dance ran the range of styles, the music was a mix of traditional, such as “Sing Sing Sing” and “It Don’t Mean a Thing (If It Ain’t Got That Swing),” to contemporary songs like”History Repeating,” “Nights in White Satin,” “Burn for You,” “After All,” “Proud Mary” and “Turn the Beat Around.” There was a lot of hard driving percussion too, which I absolutely loved. 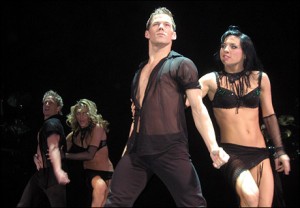 While all of the dancing was spectacular, I did have some favorites. “Nights in White Satin” was a beautiful Viennese waltz performed by featured dancers Damon and Rebecca Sugden. “Burn for You” was a very sensual rumba danced by Maks and Karina. “After All” was a sublime blend of Viennese waltz, tango, paso doble and rumba.  The Act I “Things That Swing” section was tremendous high energy fun with a lot of quick, precise footwork.

For Dancing with the Stars / So You Think You Can Dance fans like us, being up close to this phenomenal dancing was the perfect way to spend an afternoon. We’d watched a couple of Burn the Floor DVD’s (the original and the new Floor Play) in the past couple weeks and while those were good it didn’t compare to being in an intimate Broadway house sitting in the first row of the mezzanine and soaking up all the energy produced on the stage. Let’s be real too… the hot, mostly shirtless guys just added to the good time.

Here’s a video preview of the show, featuring Maks and Karina, to give you an idea of what we saw.

Burn the Floor officially opens today and continues its limited run through October 18.