The V in Valor by J.M. Snyder 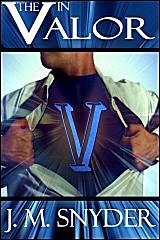 J.M. Snyder’s The V in Valor is the first of five stories in a new set of Vic & Matt adventures. It’s also my first exposure to Snyder’s super couple and I like what I’ve read so far. Since I haven’t read any of the former stories, I don’t know the complete back story, but what I do know is that Vic and Matt are linked telepathically and that Vic has an abundance of superhuman strength. The quirk here is that every time the two make love, Vic ends up with a new super power. Sometimes that power can stick around, sometimes in changes over time, sometimes and gone before he’s hardly experimented with it.

This story had a straight forward plot, mostly a day in the life of Vic & Matt. Vic’s picked up the new power of being able to manipulate metal, which he uses to rescue a dog being terrorized by some thug kids. He ultimately can let the dog be picked up by the pound, so he brings it home… even though he’d earlier said he didn’t think they should have a pet.

The next in the series of V stories was released just a few days ago so I need to pick that up and see where this goes. I think I’ll also be picking up some other Vic & Matt books to get more familiar with this couple because this first exposure was a lot of fun.