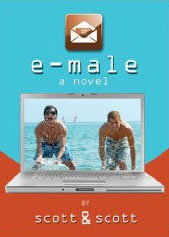 E-Male by Scott & Scott is a delightful late summer, beach-type read. It’s a fun mix of romance, mystery, party and tropical vacation all put together in a frothy package.

Kory is an internet entrepreneur, creator of the successful E-Male dating site. Unfortunately, the success has taken its toll. It’s not technology that makes the matches, it’s Kory and his exceptional matchmaking skills. If that secret got out that Kory knew all, Kory and the site would be ruined.

Zac runs a gay travel business like a tyrant. His offices are in the middle of nowhere. His employees live under the triple D rules: No Dancing, No Dating, No Drama. Even though Zac is successful, he’s not happy.

Mysteriously the two are thrown together when it appears Zac’s company wants to partner with E-male. Except Zac didn’t create the contracts for the merger. So who did?

Ultimately the two agree on a temporary arrangement that leads everyone to Baytown (or Boystown if you prefer). Here the past comes to light, there’s the huge Beach Ball with its box dancing contest, boys can party or steal away for diving or mountain hikes. For Zac and Kory they have to fight to save their businesses and, maybe, if the right match can be made, find love.

It’s great to read a new Scott & Scott book. It’s been about three years since the last one and this is just as much fun as the others. They spin great stories and here it’s a great mix of romance with intrigue. Every now and then it got just a little redundant as the reader is reminded too often about the secrets Kory and Zac have, but ultimately that doesn’t matter because the overall story is so satisfying.

Up next: David Inside Out by Lee Bantle.