David Inside Out by Lee Bantle 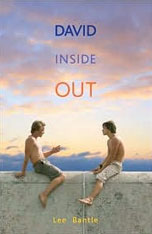 “Being yourself might make people reject you. People you desperately care about. Being yourself only works if you’re basically cool. Which I’m not.” – David

That’s the eternal issue of being a teenager, which is only heightened when the teen is dealing with coming out. That’s the subject of Lee Bantle’s David Inside Out. David is 16, on the track team, has a few close friends, a maybe girlfriend and a supportive mom. But he’s realizing that not only is his best friend gay, he might be too.

Over the course of a few months, David looses his best friend because he can’t deal with how out Eddie is. He falls hard for a closeted teammate, Sean, who can’t come to terms with his own sexuality but desperately wants some intimacy. David experiments with his maybe girlfriend with pretty disastrous results. Throughout the book, David questions himself and if he really is gay and what that might mean for him.

Bantle’s use of first person point-of-view is great for this story. The short chapters feel like blog or diary entries–a quick look inside what David is feeling that day, that moment. It gives David a crystal clear voice, which makes the book work so well. Everything David feels is laid out right there: the good, the hurt and the confusion.

The use of a trio of characters in different stages of coming out is nice to see, and reminded me a bit of what Alex Sanchez did in the Rainbow Boys trilogy. There’s David  trying to sort himself out, Eddie who is already coming out to the world and Sean trying to deny that part of himself (even while leading David on). It’s a cross section of gay teenagers that must exist in every school across the world. Readers are likely to find themselves or someone they know right here.

I’m three for three for the ya books I’ve read this year. I’m glad I keep finding such excellent stories in this genre. The three books each sports themes too, and this is the second one with track as a backdrop.

Up next: What We Remember by Michael Thomas Ford