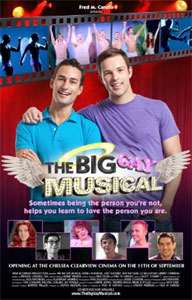 There is a lot crammed into the plot of The Big Gay Musical. Believe it or not, it’s not all a musical either.

Paul and Eddie are the leads in the new off-Broadway musical called Adam and Steve Just the Way God Made ‘Em and about half of the movie is the musical as we see different scenes that parallel Paul and Eddie’s real lives. Paul is looking for Mr. Right and Eddie is figuring out how to come out to his ultra-religious parents.

The musical within the film looks like a lot of fun and reminds me quite a bit of the Paul Rudnick play The Most Fabulous Story Ever Told. There are some pretty good original songs in the musical, especially Liz McCartney’s “As I Am,” which serves as the big 11 o’clock number of the musical.

The non-musical parts of the movie are fairly typical coming out drama and need-to-find-a-boyfriend issues. At times the messages are a little too heavy handed, but then a musical number starts and you can put that out of your mind. There’s also some unresolved plot points as Paul’s love life is disrupted when someone tells his then boyfriend that Paul is positive. It’s hinted at who did that, but there’s no resolution on that plot thread at all and that was a distraction for me even as Paul moved on to find a new boyfriend.

On the whole it was a fun movie and the original musical numbers (both in the show and in the movie’s cabaret setting) were delightful. If only that soundtrack were available on iTunes rather than having to buy a physical CD.