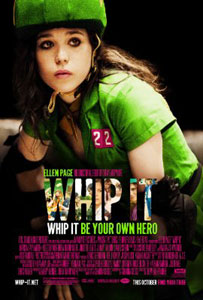 No. It’s not about the Devo song. Whip It refers to a roller derby move where you grab your teammate and whip them around the rink so they have added momentum. Not only was this a fun movie, you do get roller derby 101 out of it too.

Whip It, which Shauna Cross adapted from her debut novel Debry Girl, focuses on Bliss Cavendar, played to perfection by Juno‘s Ellen Page. Bliss is an indie girl at heart  but is somehow stuck in her mother’s pageant fantasy. On a shopping trip to Austin, Texas, she meets the girls of the Hurl Scouts. In short order she’s trying out for the team and discovering something she’s good at and enjoys. Her pageant mom (Marcia Gay Harden) does not approve once she finds out, but her supporting dad (Daniel Stern) and her best friend her very much on her side. There’s also a side love story with a cute rocker boy.

This is Drew Barrymore’s directorial debut and she does a good job. The movie keeps a good pace and the roller derby sequences are pretty thrilling, even putting the viewer right into the action at times. Barrymore’s also got a supporting role in the film as a Hurl Scout. Also showing up on the derby circuit were Jimmy Fallon in a bit part as the play-by-play announcer, SNL‘s Kristin Wiig as a single mom derby player and Juliette Lewis as a fierce rival who feels a little threatened by Bliss’ quick rise to fame.

The movie is simply a delight—it’s funny, it’s poignant, it’s got a good message about being your own hero. What’s not to like? It should be doing a lot better at the box office. I need to pick up the novel as well. Derby Girl is a YA book and I’d like to see how the novel changed, if at all, between the page and the screen.