What a week! So You Think You Can Dance finally got going with the top 20 and Dancing with the Stars did the first of two double eliminations. And, with how the scheduled worked out, I watched nearly all of the dance packed into Tuesday night. Talk about a dance-a-poolza.

DWTS, Season 9 Week 6: Jitterbugs and Waltzes were the dances of the week, along with a competition style group mambo. There were some solid performances this week, but very few things blew me away.

Let’s talk about the real disappointment first: Despite the fact that it was the highest scored dance if the night, I did not like Joanna’s waltz. She seemed to be working too hard on her posture and it felt forced, not fluid. It pains me to not like what Derek is doing, but I didn’t. The judges did though and landed them on top of the leader board. The other dance that was a flat out clunker was Melissa’s waltz. It started out stiff and in the last twenty seconds became a real mess. 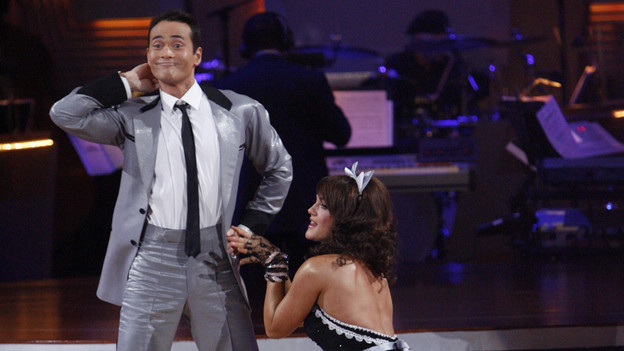 Only three dances broke away from the rest of the pack this week:

Looking across the rest of the dances Mya’s Jitterbug was fun, but there was a lot of wasted time here with very little content; Michael’s Waltz was respectable in the first half but seem to lose steam in the second; Kelly Jitterbug was a lot of fun (and it looked like she enjoyed it) but it seemed heavy in the footwork; and Louie’s Jitterbug and some really good stuff in it,  but he also dropped Chelsie and that was bad (other than that, I thought this was his best dance).

The group mambo was very cool and I liked this competition format they used. I was sad to see Louie out so early. Kelly looked like she was having a blast again. Aaron was working hard and looking good. It was great he came in third place. Donny was also great in this number, and the playful  bit he and Derek at as he left was cute. I was thrilled that Joanna and Derek’s hot and raunchy number won.

For the elimination, I’m not surprised Melissa went  home. It’s been a rough couple weeks since the 10s of the Charleston. I was extremely disappointed that we lost Louie. He and Chelsie make such a great couple and his personality is charming (plus, he just sexy cute). Michael on the other is working my last nerve. His dances are never that strong and his attitude is grating. I’m hoping with the second double elimination next week we can be rid of him!

SYTYCD, Season 6 Top 20: What a fantastic So You Think You Can Dance week. The “Meet the Top 20” showcase on Monday night was incredible. It opened with a wicked cool Wade and Amanda Robson-choreographed group number and it just got better from there. This season’s contemporary dancers are just stunning, especially Jakob who just might be the one to beat this year. His moves are so powerful and he’s got the right combination of dance and performance. His work in the “Crying” number was spectacular. It was great to see everyone in their own styles, but the production team needs to learn how to mic the tappers better as that sound was a bit grating.

Tuesday night was the first performance and elimination. While all the couples did great, many numbers stood out for me. Jakob once again was stunning with Ashleigh in a Broadway number. In fact he completely out danced her and I think Tyce gave Jakob the better moves because he knew he could handle them.

Ariana and Peter got a little ripped from the judges for their robot hip-hop, but I loved it. Krumper Russell had a rough time with his partner being injured, but he did a gorgeous Foxtrot. Travis Wall’s piece for Bianca and Victor was amazing and I’m looking forward to seeing more of Travis’ work this season. Sonya created a very funky piece for Ryan and Elleanor and I just ate that up (I think these two, by the way, are going to be an amazing couple). Pauline and Brandon’s Smooth Waltz made me cry it was so beautiful and Brandon did a great job stepping in mid-week for the ill Billy Bell who had to drop out due to illness. Last up for the night was a killer disco number from Mollee and Nathan.

There was judges elimination at the end of the night. I’m annoyed Russell was in the bottom two. That’s just wrong! I would’ve put Kevin down there for a pretty bad cha cha. In fact, I would’ve sent Kevin home over Brandon who also did a job worthy of staying in the competition. On the girls side, Ariana and Pauline were in the bottom and Ariana went home and that was sad because, as I said, I loved the robot dance. I would’ve put Ashleigh out (like Nigel said, she’s only as strong as her partner).

I hope Nigel’s able to make it so Brandon can come back… and Billy too since he had to bow out before he really ever started.