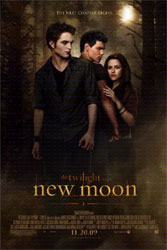 I wasn’t a fan of New Moon in book form for many of the same reasons I don’t like The Twilight Saga: New Moon in movie form. Bella still spends those four dormant months and instead of  blank pages we get agnsty music and a montage. In fact, she whines and mopes a lot and it was actually harder to see it (and hear Kristen Stewart speak it) on the screen than it was to read it.

Plus, the stuff I liked best about New Moon was pretty much excised from the movie. Most of the wolf and Volturi back stories were severely truncated. I thought the wolf story would’ve actually made a good sequence of the film. At least the wolf pack added very nice eye candy to the film even if their story was missing. The wolf effects were thankfully decent, unlike the vampire sparkle effect which looked as bad as it did in the first film (couldn’t they have tweaked that just a wee bit to make it look better).

I was hoping director Chris Weitz would do something great with this film (like how Alfonso Cuarón changed the tone of the Harry Potter movies with Harry Potter and the Prisoner of Azkaban). I love 2002’s About A Boy, but Weitz seemed to play it safe here. It was difficult to tell that the directorship had actually changed over to him from Catherine Hardwicke. Maybe the series needs a screenwriter change too since Melissa Rosenberg’s been doing that so far. For better or worse, she’s already done the screenplay for Eclipse.

Speaking of Eclipse, I’m sure I’ll turn out for that in June 2010. Eclipse was my favorite of the books and I’m hoping it makes a good film. If it doesn’t I don’t think I’ll turn out for the adaption of Breaking Dawn. That book was over-long and the idea of it being two movies rather than one tight film already makes me leery of it. If Eclipse doesn’t live up to expectations, I think I’ll be finished with this saga.