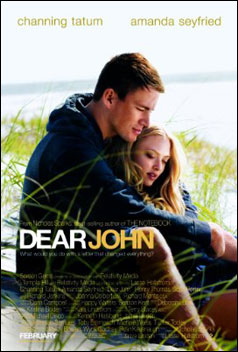 I’ve been looking forward to Dear John since I saw the trailer last fall. I’m a sucker for a film based on a Nicholas Sparks novel since The Notebook and this movie did not let me down.

In the same way that Ryan Gosling and Rachel McAdams were perfect in The Notebook, Channing Tatum and Amanda Seyfried were perfect in this film. The two have excellent chemistry making it easy to fall in love with them. Tatum plays a solider home on leave and Seyfried is a college student home for break when they meet and have a whirlwind two week romance. When they separate, they agree to write and tell each other everything… and that they do.

In theory, he is supposed to be out of the army in a year. But then 9/11 happens and plans fall apart. I’m not going to give out any spoilers here, but I will say that before seeing the movie I had two endings in mind and neither one happened.

Richard Jenkins (Six Feet Under) has a great supporting role has Tatum’s father. When Jenkins first appeared I thought he’d end up under-used, but it turned out to be a pivotal part of the story and Jenkins makes the most out of his screen time. Henry Thomas (E.T.) shows up as well as a family friend of Seyfried’s.  I didn’t recognize Thomas at all and was surprised to find out it was him during the closing credits.

I was braced to cry at this movie, and that I did. I didn’t expect it to start up so early in the film but I got caught up in the romance and was a goner from there. The only time the movie sputtered a little was when the movie was focused on Tatum’s character in the battlefield. Luckily that only lasted a few minutes before things got back on track.

Sparks has another novel coming to the movies this spring with The Last Song, due out March 31. I have to say I’m not as excited about this one becuase Miley Cyrus stars and I just don’t see her in the role of a Sparks leading lady. The trailers don’t make me feel like I need to rush out and see it. Maybe the reviews will change my mind.