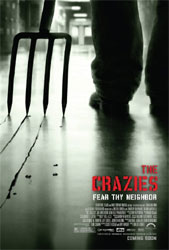 Timothy Olyphant is the reason I wanted to see The Crazies. I don’t usually get all excited for scary looking movies, but I like Olyphant and the virus-making-people-crazy plot didn’t seem like it would give me nightmares for days. I’m glad I took the plunge because this was an enjoyable popcorn not-so-scary movie.

This remake of a 1973 George Romero movie (and Romero is an executive producer of this remake) centers on a small town in Iowa where toxic chemicals are in the water table and start making the town’s population crazy… and the usually results in the crazies killing those who are not. The government steps in to try and contain the problem and things only get worse from there.

There are holes in the plot you could drive a truck through, but I really didn’t care becuase the pace and Olyphant’s performance kept the ball rolling. But let’s just talk for a moment about the oddities:

Anyway, as I said, it was still an enjoyable movie watching what obstacles would be thrown in front of the sheriff, his wife and the band of people trying to get away from the crazy people.