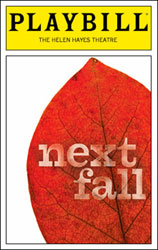 Geoffrey Nauffts’s Next Fall is an extraordinary piece of work that tackles many deep issues in its just over two hour running time.

The show spans a five year relationship between Luke,  someone with deeply held Christian believes, and Adam, a non-believer. From their first breakfast together Luke’s faith in God is an issue.  Adam can’t grasp how Luke can believe so intensely, while Luke doesn’t understand how Adam can get through life without the peace in knowing what comes after death. The couple has many arguments over the years around this topic, and those can be uncomfortable to watch at times as Adam seems to mock Luke’s beliefs.

Another issue for the two is that Luke is not out to his conservative parents. He’s promised to do it “next fall,” but then never quite gets around too it because he’s scared of the consequences. He’s got reason to be sacred too, his father gets derogatory on gays a couple of times. 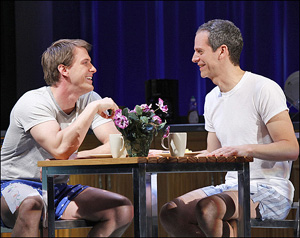 Everything falls apart for the couple in the opening minute of the play when Luke is hit by a taxi and taken to the hospital with a serious head injury. Luke’s parents arrive in New York from Florida ahead of Adam, who was also out of town. Since Luke’s parents don’t know that Adam is their son’s boyfriend he has no privileges at the hospital.

As Luke’s condition worsens, Adam has to decide if he’s going to keep quiet or tell Butch and Arlene what their son means to him. The action switches  between the present at the hospital to scenes of  Adam and Luke’s five years–from their first meeting to their final moments together before Adam headed his high school reunion.

Nauffts, a writer on ABC’s Brothers & Sisters, crafted a thought-provoking work that studies Christianity and the role it can play in a gay person’s life, how Christians judge and can be judged (often unfairly in both cases), the stigma of having to leave your family in the dark and heartbreaking medical decisions. Director Sheryl Kaller and an excellent group of actors bring the work to life excellently and pull no punches with the emotions.

I liked this play a lot as it deals with topics not often discussed and it leaves you thinking long after you’ve left the theater. Faith and spirituality are difficult topics. I like the shades of faith shown here as it is a good cross section: Luke is the kind of Christian I was taught to believe Christians should be. Luke’s father is more the hellfire/brimstone type. Luke’s friend Brandon as well as Luke’s mother fall in the middle (and I’m not giving away where that middle ground). It’s not just how these character’s relate to being gay either, it’s their takes on other faiths that add extra nuance to the story.

Next Fall just opened on Broadway this past week, transferring from a successful off-Broadway run last summer. I highly recommend the production to anyone interested in seeing a compelling drama. I expect it will be highly honored with the awards season begins later this spring.