How They Met, and Other Stories by David Levithan 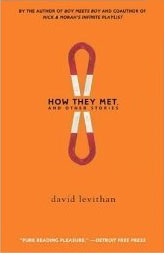 Eighteen excellent short stories are inside How They Met and Other Stories by David Levithan. Of those I have to single out two as extraordinary… stories that will sit in my brain forever and, hopefully, make me a better writer for having read them.

As you might guess from the title, the book is about how people met and fell in love, or in a couple cases opted to not fall in love. It was fascinating to see how Levithan’s writing style changed from story to story. There’s a story done in verse, there’s one that features passages in second person (which I love to see when it’s done well as this was) and there’s an interesting technique with just a small part of the story appearing on each page. Plus the points of view are all over the place as he brings completely different types of characters alive in each story.

The two stories that warrant extra praise are “Princes” and “What A Song Can Do.”

“Princes” is about a young dancer named Jon who falls for one of his teachers, Graham. He wants to bring Graham to his brother’s Bar Mitzvah. His parents say no, but brother Jeremy puts his foot down and says yes, or there won’t be a Bar Mitzvah. Watching Jon deal with his feelings for Graham is just the beginning of the goodness here. Jeremy’s support of his brother is awesome. Plus, Jon has a really good friend in Miles, who may actually want to be something more. The whole package is so vivid and poignant I had to stop reading for a while after I finished this story because I wanted it to resonate longer.

“What a Song Can Do” is the story that’s written in verse, which is completely appropriate for a story about a musician and the boy he is falling for. The struggle for the two is that they like very different music. The musician tends to write softer songs, with clear lyrics. While the boy, Caleb, is more about dance music that might only have six words repeated infinitely. I have to share just a brief moment of this story because it also perfectly encapsulates what love is (note that this is a bit of a spoiler for this story… but you should read it all anyway because how it gets here and where it goes after is just incredible):

“… And I tell him that music
cannot be separate from love, that you
can’t have one without the other, that
he is my love song as much
an anyone can be. But I am still not sure
that I can be his dance. He parks the car and
kisses me softly and says this is the dance
and I kiss him hard and say this is the song.
Because all of the chords are in crescendo
and he is their source.”

If you like relationship stories (and I use that instead of “love” stories because not all of these end in love… in fact “A Romantic Inclination” looks at math/science advising against love), you must pick up this book because page after page will keep you enthralled.

Up Next: Physical Therapy by Z.A. Maxfield (a sequel to St. Nacho’s, which I read earlier this year).