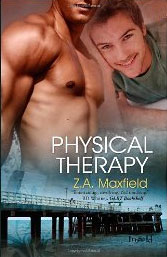 One of the first books I read this year was St.Nacho’s and now I’ve completed Z.A. Maxfield’s followup, Physical Therapy. This story jumps forward several months after the events of the first book. This time it’s Jordan who has come to St. Nacho’s looking for a new beginning.

We met Jordan in the first book. He’s Cooper’s best friend and the end of the story found him in rehab trying to put his life back together. Now he’s moved to the magical small town Cooper told him about hoping to find the same peace his friend did.  Right off the bat Jordan gets a job at the local gym as a trainer/massage therapist and quickly meets the locals. Among them is injured baseball player Ken, the victim of a drunk driving accident that left him severely injured and his best friend dead.

Jordan worries that Ken will want nothing to do with him because of his past (which I’m not mentioning here since that’s a spolier to St. Nacho’s). Ken, however, sees in Jordan someone who makes him calm and gives him the desire to get well and live again instead of just being angry. It’s St. Nacho’s weaving its web to heal damaged souls.

Maxfield once again paints vivid characters working hard to make sense of their past and present. At times it’s difficult to read their pain, but it always pays off and makes you stop to consider your own life for a moment. It was nice to catch up with Cooper and his boyfriend, Shawn, as well to see how St. Nacho’s was treating them.

I do feel something is unresolved, however. Late in the novel, after Ken’s family has issues with him taking up with Jordan, Jordan is assaulted outside his hotel room. I’m not completely sure who committed the crime. I haven’t gone back to re-read that section, but it’s odd to me that I don’t know who it was. It didn’t take away from the overall impact of the story, but it’s odd that such a critical piece of information slipped by.

Regardless of my small issue above, I would love it if Maxfield took us down to St. Nacho’s for another visit.

Up next: Sins of the Father by D. W. Marchwell.