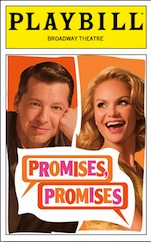 The revival of the 1968 Burt Bacharach/Hal David/Neil Simon musical Promises, Promises received mix reviews when it opened last month, but I found it to be a delightful afternoon’s entertainment. Not only does it boast the always wonderful Kristin Chenoweth, but also a tremendous star turn from former Will & Grace co-star Sean Hayes. There’s also scene stealer Katie Finneran who makes the absolute most of her 15 minutes of stage time.

The story is based on the 1960 Billy Wilder film The Apartment, which focused on a neebish office worker who yearned to become a junior executive. He ended up on the exec track by loaning out his apartment to other execs so they’d have a place to take their mistresses. This arrangement works well until the young exec discovers a woman he’s interested in is one of the mistresses.

Hayes completely looses his Jack McFarland character here and instead plays the lovelorn, mostly invisible exec wannabe with sincerity and humor. At times he channels Jerry Lewis, who he played for a TV movie in 2002 (a role he earned a SAG Award nomination for), when things go more slapstick. Hayes has a great voice and captured the audience from the get go with a winning stage presence. He held his own easily with Chenoweth and Finneran too, which was not easy at times as the women had some meaty roles. He deserves the Tony Award nomination he earned for this role, and I wouldn’t be surprised if he wins it. 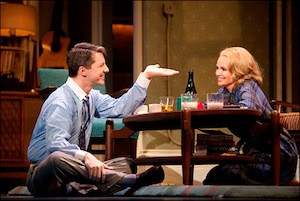 Chenoweth is a delight. This was the first time I’ve seen her on stage since she was in Wicked and I loved hearing her do some Bacharach/David classics like “I Say A Little Prayer” (which was not part of the original score, but added for this revival), “A House Is Not A Home” (which she recently sang a few lines of in the “Home” episode of Glee), “I’ll Never Fall in Love Again” and “Knowing When to Leave.”

There were three standouts in the supporting cast. As I mentioned Finneran rules the stage at the top of Act II as Hayes’ character comes across her in a bar where they are both drowning their sorrows on Christmas Eve. Her rapid fire dialogue and excellent comic dialogue are a treat. I think she’ll be winning the Tony she’s nominated for as well. Dick Latessa plays the next door neighbor doctor and he has some good scenes with Hayes and Chenoweth. I was also glad to see Seán Martin Hingston on stage again for the first time since I saw him (and crushed on him) in Contact. He’s one of the execs using the apartment and he gets some great comedy with his fellow execs, but it was his dancing during “Turkey Lurkey Time” that I asboltuley loved. 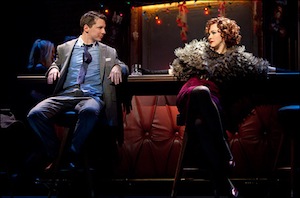 Speaking of dancing, director/choreographer Rob Marshall hit a choreography home run here. The 60s infused style is awesome from the dancing during the overture to “Turkey Lurkey” to the bar scene at the top of Act II to the curtain call it is all excellent. I wish there could’ve been more, even though I have to admit there’d really be no place for more. This is another Tony I hope the show picks up in a couple weeks.

I can see why audiences are packing the Broadway Theatre even with the mixed critical notices. Promises, Promises is a perfect crowd pleaser. Two wonderful stars in Hayes and Chenoweth, a supporting performance from Finneran that is not to be missed and the great Bacharach/David songs. I suspect this will winning over audiences for months to come.