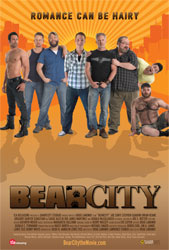 Bear City has been making the rounds of the gay film festivals this spring and summer, and picking up some nice kudos and awards along the way, including being a Centerpiece Film at NewFest in New York as well as a Best Screenplay award for Doug Langway (who also directs) and Lawrence Ferber at OutFest in LA. We missed its NewFest run, so we were excited when posters went up in Ptown this week for a return engagement for Carnival. We snapped up tickets and finally saw it this afternoon.

The movie is wonderful!

The primary plot revolves around Tyler, an aspiring actor and out gay man who is struggling to come out in another way–that he loves bears (that genre of gay men or are large and hairy). Tyler, who would be considered a cub since he’s thinner and mostly smooth, finally goes out to a bear bar and is embraced by a group of great guys… even renting a room from one couple because he’s own sublet has expired. Tyler also meets Roger, a muscular bear that he wants to date. Roger, however, has a bit of a reputation and while he’s into Tyler, Tyler doesn’t quite fit his image.

Elsewhere in the movie, Fred and Brent, a long time couple, struggle with keeping the spark in their bedroom (especially with Tyler taking the spare room). Michael and Carlos are having trouble because Michael wants to have lap band surgery so he can loose weight and maybe do better at job interviews. Carlos hates seeing Michael give up that part of himself, especially since it’s clear that Michael doesn’t really want they surgery.

It was great seeing so many different aspects of gay life presented in this film. So often gay films are filled with the pretty “Chelsea Boy” types coming out or falling in love… and that’s all fine. I like many of those movies. It is refreshing, however, to see this cross section with a story of their own. Here the Chelsea-type wants a bear. This can be, unfortunately, frowned on within some circles… as an example, Tyler is afraid to tell his best friend Simon about his attraction to large, hirsute men.

Michael’s story also turns around the usual stories on body image. It’s usually a woman who is feeling the pressure to lose weight to get ahead. Or, in gay stories, it’s about someone feeling the urge to turn into a muscle god. Here it’s tearing Michael up that he’s been turned down for jobs because he’s overweight. He’s not looking to become a hunk, he’s simply wants to do what he thinks is necessary to be employable.

The movie is full of humor, heart, drama and a lot of honesty about what it can mean to be a part of a sub-community inside the larger gay community… and the ramifications if you try to change that community’s rules.

Besides the plot being of interest, I also wanted to see Bear City because I worked with Doug Langway at Promotions.com. He was in charge of the creative team when I started there and he left the company to work on the movie. I’ve been following it the past couple years on Facebook and its website and it’s great that he’s realized his dream and that it’s been such a success on the film festival circuit. Doug was in Ptown, along with some of the cast and crew, and I got to catch up with him for a few minutes after the movie. It sounds like he’s had a great time getting Bear City off the ground. TLA Video releases the DVD in November. The movie will have a larger theatrical release in October ahead of that (including another NYC run). There’s even a sequel in the works, which I’m already looking forward to.