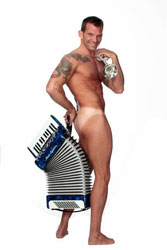 Judson turned his story into the one man show Canned Ham a couple years ago and we caught his summer stint playing in Provincetown. He talked about his husband, who passed away in the late 90s from AIDS, his stint as an escort to pay bills, how he got into Broadway musicals because he can sing and play multiple instruments (and not because he can dance) and what it’s like to work in adult films.

We got a great sample of his musical ability as he played the accordion, sax, clarinet, trumpet and piano. He also sang songs from the shows he toured with.

Talk about a multidimensional individual. I wish he’d gone into how he became so musical and what that training was because it was impressive watching him move so easily between instruments.