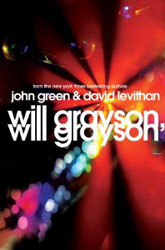 Will Grayson, Will Grayson by John Green & David Levithan is one of the more imaginative books I’ve read recently (and be warned… this review leans a little toward spoilers, so proceed at your own risk).

It focuses around two teenagers in the Midwest who are both pretty miserable. As you might guess from the title, they are both named Will Grayson. The chapters alternate between Will Grayson, who lives in Evanston, Ill., and operates his life by two rules: 1) Don’t care too much, 2) Shut up. The other will grayson (and the lower case letters are deliberate there) is on medication to keep him mentally stable, has few friends and talks most with his Internet boyfriend.

Will’s got two friends–Jane and Tiny. Tiny, who is anything but, lives a very out and loud life and is writing a musical about it for all the school to see. Jane likes Will and Will likes Jane, but they have a very hard time connecting on that. You see, Will’s rules get in the way a lot.

Meanwhile, will has Maura who thinks she’s being a friend but is really (in my opinion) evil incarnate and needs a harsh punishment that’s never fully delivered in the book. She pulls off one of the cruelest things I’ve read in a long time… and the sad thing is it probably happens in reality far too often. His Internet boyfriends, Isaac is too good to be true.

Eventually Will, Tiny, Jane and will all end up in Chicago together. Will and will can’t believe that they’ve met someone with the same name.Tiny helps will put himself back together after his world shatters. Jane and Will have the heart to heart they’ve always needed to have. Things aren’t all rosy for Will and will after Chicago, but things come together to let them see that their lives aren’t as bad as they seem. Watching all this happen was wonderful and while some of it seems quite over the top, somehow it seems to work in the universe that Green and Levithan have created for these characters to inhabit.

The character voices are very well done in this book. Will Grayson’s chapters read pretty much like regular prose with Will have a strong voice and clear perception on things. The other will grayson seems like it’s all be written like one long instant message, and that certainly works for the character and as his world gets a little better, his writing gets a little closer to regular prose.

Like any good books, this one left me wanting more. I also want to see the musical Tiny wrote because it sounds like it would be some Up with People kind of excellent.