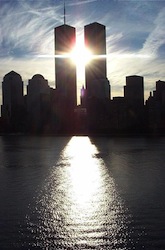 This morning marks the ninth anniversary of the horrific events from 9/11/01.

It’s a disturbing anniversary too as this year there’s a lot going on that is perverting the remembrance from what it should be into things that are distasteful.

The right tone was set with the first anniversary memorial ceremony. Family members who’d lost people in the disaster along with first responders read the names of the dead. Remarks that were made were not political in any fashion. Then Governor George Pataki read the Getteyburg Address, which contains this quote: “But, in a larger sense, we can not dedicate, we can not consecrate, we can not hallow this ground. The brave men, living and dead, who struggled here, have consecrated it, far above our poor power to add or detract. ” Moments of silence were observed at 8:46 a.m. (when American Airlines flight 11 struck the north tower), at 9:03 a.m. (when United Airlines flight 175 struck the south tower), at 9:59 a.m. (when the south tower collapsed), and at 10:28 a.m. (when the north tower fell). The ceremony was held at Ground Zero.

It was solemn. It was dignified. It was appropriate. Most of all, it was very powerful and moving.

This morning, a very similar ceremony will take place at and near Ground Zero (I don’t know what the speeches will be. I can only hope there’s no politics). As far as I’m concerned this type ceremony can happen every year in perpetuity because it is a fitting memorial for the worst day many of us have ever known.

However, as I notes, there is so much wrong now with how the memory and significance of 9/11 is being used.

Politicians think it’s okay to use 9/11 imagery in their ads as they run for office. I’ll never vote for someone who invokes 9/11 in their campaign. These events are not for politicians to use.

A supposed man of God wants to burn the holy book of another religion (yes, I know he’s not going to do it now, but the damage of his intensions is done). This is unfathomable and un-Christian. There’s also the anti-Muslim sentiment in this city and country, which feels even stronger than it did in the weeks after 9/11. With freedom of religion as one of the basic freedoms this country was founded on, there are a scary number of people who seem okay ignoring that… and using the right of freedom of speech to justify it.

Sarah Palin and Glenn Beck having a commemoration in Alaska. Palin wrote this on her Facebook page about the event: ” I can think of no better way to commemorate 9/11 than to gather with patriots who will ‘never forget.'” I’m not sure where that leaves the rest of us who aren’t making the trek to Alaska or who don’t believe in the divisive rhetoric that Palin and Beck engage in.

I can tell you this, I don’t feel unpatriotic.

If anything I feel let down by the country’s leaders who seem to spend more time squabbling across party lines instead of cooperating to bring this nation’s diverse population together and make the United States a better place to live.

What will I be doing this 9/11 morning? As this publishes at sunrise, I’m off on a bike ride in and around Manhattan. I expect a quiet moment of reflection at Bethesda Fountain in Central Park as well. Why there? I find that to be a very solemn and peaceful place. The morning of 9/11 is always difficult for me as that is the scariest day I’ve ever experienced and it all comes flooding back as I see people en route to the memorial and hear the church bells ring at the appointed times.

Two rememberances of 9/11 to share with you. First, there are posts from this site. (albeit not a blog back then, we did end perserve the text we had up on 9/11 and for a few days thereafter.) Second, a post that was brought to my attention yesterday by a friend. It was written by a man who attended a conference just blocks away from the WTC. It is one of the most powerful recollections of 9/11 I’ve ever read and truly puts that day into perspective.