Without You at NYMF 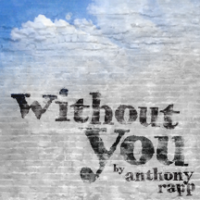 I am predisposed to love this show being the Renthead that I am and I’m pleased to say that I wasn’t disappointed in the least.

Based on Anthony Rapp’s 2006 book Without You: A Memoir of Love, Loss, and the Musical Rent, the one man show of Without You distills the book down to its two core stories: Rapp’s involvement with the creation of Rent and the reemergence of cancer in his mother and her eventual death from it. The show opens with Rapp running late to his first audition for the 1994 workshop production of Rent where he sings the R.E.M. song “Losing My Religion.”

From there the story is off on moving as Rent goes from workshop to a full run at New York Theatre Workshop and Jonathan Larson’s passing on the night of the final dress rehearsal. Rapp takes the audience through the emotional roller coaster of prepping the show, dealing with Larson’s loss and the whirlwind of moving the show to Broadway. At the same time we hear of his mother’s renewed bout with cancer, which the family thought she’d defeated two years before. His mother makes it to New York to see Rapp open in Rent, but over the following months he goes back and forth from NYC to Joliet, Illinois to be with his mother as much as possible.

Rapp, along with director Steven Maler, have crafted a powerful and extremely emotional piece as it weaves between the creation of Larson’s master work, the incredible professional high that Rapp was on as the show exploded and all the while trying to be a good son to his dying mother. Rapp does an excellent job telling the story and adopting voices and movements of various people including members of his family, Larson and his parents, Rent director Michael Grief and a couple of his Rent co-stars Adam Pascal and Daphne Rubin-Vega.

Eleven songs from Rent work their way into the story. Some only show up as background music or with just a few of the lyrics sung. Some others are notable because of their arrangements for this show or because they are songs that Rapp doesn’t sing in the show as Mark. “Without You,” which he sang for his mother’s funeral, takes on a whole new meaning here and he sings it beautifully. He also does “Seasons of Love” as a solo number with the results being goosebumps. His excerpts from “One Song Glory” and “Another Day” are also excellent.

There are also six original compositions from Rapp. Three of them–“Always,” “Just Some Guy” and “Visits to You”–are on his 2000 solo recording Look Around. The other three, I believe, are written specifically for the show. “Wild Bill” was an excellent song, written about his mother’s cancer which she had named “Wild Bill” (she tended to name inanimate objects and her cancer was no different). “That is Not You” was angry and heartbreaking as it dealt with Rapp’s reaction to seeing his deceased mother.

Without You had its premiere engagement in August 2008 at City Theatre Company in Pittsburgh. I suspect this stop at NYMF is just one more stop on its way to success. Rapp has a powerful message of coping with life’s highs and lows and the mix of Rent music and his original tunes should appeal to a broad group of theatregoers. I hope he records the score as I would love to have his solo take on the Rent songs as well as his music (even though I already have some of them on an earlier CD).