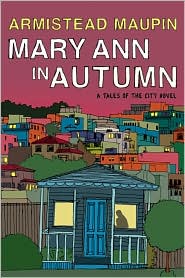 What a delight that a new Tales of the City novel published this month. It’s been just over three years since Michael Tolliver Lives debuted and now Armistead Maupin brings us a Mary Ann centric story with Mary Ann in Autumn. I couldn’t put this book down, finishing it off within about 36 hours of starting it.

The book opens with Mary Ann arriving in San Francisco to see Michael. Two crises have driven her back to her old friend–the break up of her most recent marriage and a cancer diagnosis. Fifty-seven year old Mary Ann is a much different woman after all the years in Connecticut. She’s more timid, less self-assured… more like the person she was when she’d first arrived at the start of Tales of the City than the woman she became during the series.

Besides Mary Ann’s primary story line there two other stories in play as well. Jake, the transgender partner in Michael’s landscaping business, has some very interesting interactions with a young man who is struggling to find his way. Mary Ann’s daughter, Shawna, gets drawn into the orbit of a homeless woman who has a very intriguing past. Through the novel we get to check in with DeDe, Ben (Michael’s husband) and, of course, the beloved Anna.

There’s a stunning twist in the story too, one that flashes back to the first Tales book. I didn’t see it coming and was quite surprised. Maupin’s always been great with how he intertwines his characters and this ending is one of his most masterful turns yet.

I almost regret reading the book so fast because it means the visit with the Barbary Lane folks is already done. I certainly hope Maupin allows another trip to this magical place again soon.

Up Next: The stories Dreamspinner Press’ 2010 Advent Calendar Set – Naughty or Nice