Walk the Road: A Journey Begins 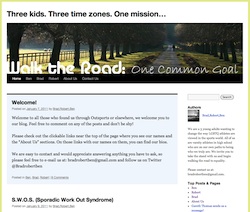 Among the many tweets that flew by my screen this week was this from Outsports: “Gay high school athletes blog to make difference: “Three kids. Three time zones. One mission …” That’s the tagli…” Since I’m working my way through writing a novel where two high school athletes come out, I had to see what came after the ellipsis.

Outsports.com’s Jim Buzinski wrote about Brad, Robert and Ben, three high school athletes, who have banded together on one blog, titled Walk the Road, to share their story. Two of them are soccer players and the other runs track. They are each working their way through coming out. One of the first posts is a letter Brad wrote to his parents to come out as the new year started. According to Outsports, none of them are out to their teams yet. You can imagine, however, with them out on the net, including showing pictures of themselves, that by the end of the school year that part of their coming out process will be in full swing.

The nice thing is that they each seem ready for it. “I stand before you as a gay athlete, a soccer player, an average guy with a dream to rid the world of ignorance,” writes Robert in “We’re all in this together.”

I expect (and hope) these guys will inspire others to take similar steps. With all the widely reported suicides in 2010 and the hateful rhetoric that continues into this year, the positive message on Walk the Road is a breath of fresh air.

I look forward to seeing what the future holds for Robert, Ben and Brad and wish them all the best.