My Opinion: The Golden Age of Gay Fiction 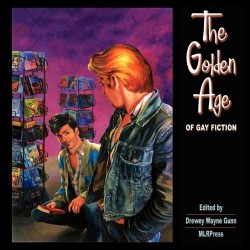 Though I seldom post reviews per se, I wanted to briefly mention the book I just finished reading. If you have even the slightest interest in the history popular gay fiction, you could do a lot worse than picking up a copy of The Golden Age of Gay Fiction, edited by Drewey Wayne Gunn.

Though the entire volume is worth reading cover-to-cover, my favorite sections were written by the authors who were at the forefront of the gay paperback revolution. Victor J. Bannis (writing as Don Holliday and J.X. Williams among others), William Maltese (writing as William J. Lambert III, Chad Stewart and Lambert Wilhelm) and Jan Ewing (as Jack Evans) all provide first-hand accounts of that wild and wonderful time. At the end of his essay Biker’s Boy Redux: A Distant Memory, Evans recounts his attempt to collect payment for his popular novel Biker’s Boy.

The only downside to this volume is that I now desperately want to find and read many of the fantastic tales mentioned in the book, but most have either become exorbitantly priced collectables or sadly lost forever (by their very nature, pulps were “disposable” entertainment).

In the final essay, I think Gunn sums it up best.

Our literary heritage is so much richer than we have ever been led to believe.