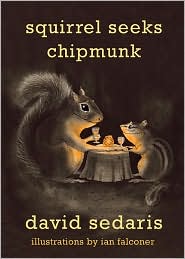 I’m a huge fan of David Sedaris. His books, which typically revolve around stories about him, his boyfriend and his family are full of wit, insight and great writing. His new book, which is the third and final book I got from Will over Christmas, is a considerably and awesome departure from his usual story telling technique. Squirrel Seeks Chipmunk: A Modest Bestiary bring animals into the forefront, giving them very human characteristics.

There are 16 stories, each with one or more illustrations from Ian Falconer (who is the author and illustrator of the Olivia series of children’s books, that felt very Dr. Seuss-esque. The stories don’t have Seuss language, but the way Sedaris draws you in with a whimsical simple story and then zings you with some real world lessons reminded me a lot of the good doctor. The whole volume could stand alongside Horton Ears A Who and be in good company.

All of the stories were great. A few stood out for me though. “The Crow and the Lamb” was the most gruesome and I gave at audible gasp as I read the last page. “The Grieving Owl” I loved because it highlighted how you make your own family sometimes. “The Faithful Setter” was sad and is no doubt a portrait of the way many peoples lives are. “The Vigilant Rabbit” disturbed me and is a good study of what happens when you give someone too much authority. “The Cow and the Turkey” was tragic and ended with a cliffhanger that I wish had been resolved (or, maybe it was and I missed it).

Overall this volume was hilarious, powerful and, more than once, gruesome. In short, in was excellent (and a quick read as I blew through it in about a day).

Here’s a quick video of Sedaris introducing the book–he reads the inside flap and shows some of the great illustrations.

Up next: Zero Regrets by Apolo Ohno