Zero Regrets: Be Greater Than Yesterday by Apolo Ohno 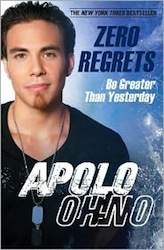 Here are a few passages that stuck out for me from Apolo Ohno’s biography Zero Regrets: Be Greater Than Yesterday:

From page 153: “Dad always asked me, moreover, ‘When somebody has a microphone in your face, what do you have to say? Are you going to sit there with a blank look on your face and say nothing? Or are you going to offer something that’s going to resonate with people?'”

From page 194: “Blocking out fear never works. You’re just closing the door. You know it’s still behind the door lurking. But if you open the door and greet it, you’ve made an appropriate acquaintance with that emotion: Hi, I know you’re there, but, no, you can’t come in right now. Later!”

From page 217: “…just because you have a certain set of talents that you know about doesn’t mean that maybe you don’t have others, too. Don’t disengage yourself from an opportunity because you’re scared or you don’t think you can do it.”

From page 222: “I did my sport because I lived and died with it. I believed in it with my heart.”

As you can imagine from the quotes, Zero Regrets spoke a lot to me. It expanded on things that’ve been on my mind since I read The Art of Non-Conformity this past fall. You can believe that Apolo doesn’t conform to anyone’s expectations except his own. He was strong headed well before he became an Olympian. Back in ’98, at age 15, he spent a week alone on the Washington coast to figure out what he wanted to do. It turned out speed skating was the answer.

We all know from the countless athlete profiles that air during Olympics coverage that these athletes train hard. The mental and physical training Apolo and his close advisers came up with is stunning–particularly what he did leading up to the Vancouver games. He calls it insane in the book, and I agree. I can’t imagine putting myself through that. However, reading what Apolo did makes my desire to be at least 20 pounds lighter for Braking the Cycle this year seem very doable by applying some of his strategies.

The book is a great portrait of the boy becoming a man on the world stage, inside his sport and with all the ups and downs along the way. It’s also an amazing story of a father and son with an incredible bond. Plus, there’s some pages devoted to Dancing with the Stars too. While it’s not while I picked up the book, it was cool to read since I was a fan of his stint on the show.

The overall message is a powerful one, especially when you see how it has all played out for Apolo so far. He strives for zero regrets. To absolutely give everything he had, 100% effort every time. If you do that, no matter the outcome, there are zero regrets because you couldn’t have done better. What was supposed to happen, happened. It’s only when you give less than your best that regrets can creep in.

At the end of the book, Apolo says he hasn’t decided yet if he’s going to race in the 2014 Winter Games in Russia. Whether he does that or not, I am curious to see where he puts his energy and focus next. It will no doubt be something extraordinary.