A Few Thoughts on Spider-Man: Turn Off the Dark 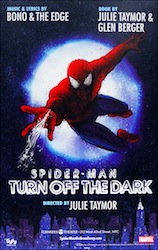 Here’s a fun factoid from the JeffAndWill.com archives. I first blogged about Spider-Man Turn Off the Dark on February 24, 2009, which is the day the show was officially announced. At the time, previews were to begin at the Hilton Theatre (which has since undergone a name change to the Foxwoods Theatre) on January 16 2010 with an opening night of February 18, 2010.

Another factoid: Will and I were supposed to see the show today. We decided not to because this is one show we’d like to see after it’s officially opened and all the kinks (large and small are worked out).

It’s well documented how the show has fared since it actually got its preview up and running on November 28, 2010.  Here’s a quick rundown on the most recent set of dates the show’s had (in case you’re trying to keep track):

On November 5, it was announced that the previews that were supposed to being on November 14 would delay to November 28 and that opening would move from December 21 to January 11. On December 17 the opening was moved to February 7. On January 13, the musical set it’s opening for March 15, a date which is still on the books.

When all is said and done, Spider-Man: Turn Off the Dark will have more previews than any show in Broadway history with something over 100 (I haven’t done the exact math). The previous holder of this dubious achievement is the 1991 musical Nick & Nora, which previewed for 71 performances and then closed after only 9 regular performance. Even with all the previews, Nick & Nora couldn’t be fixed despite a high-calibre cast and crew.

With a capitalization of more than $65 million, Spider-Man: Turn Off The Dark needs to be up and running to simply pay its bills… and it needs to be a long running success if it’s shareholders expect to ever be paid back, much less turn a profit. One report indicated that the show needs to make between $1 million and $1.2 million per week just to cover its operating expenses. The show makes right around that amount if it sells out for the week and the majority of the tickets sold are full price. Few shows make that kind of money outside the holiday season–mostly that $1 million+ crowd is Wicked, Jersey Boys, Billy Eliot, The Lion King and sometimes Mamma Mia.

Here’s the problem with the extended preview period, at least for me: People are essentially paying to watch the show go through rehearsals. Unless they happen upon a discount offer–and there’s only been one out there that I know of that dropped orchestra seats to $99 for a limited time–they’re paying around $140.00 to sit in the orchestra or front mezzanine. That’s a lot of money for a show that may get stopped in the middle or that may still be under going story/music changes.

When the show pushed it’s opening date to March 15, lead producer Michael Cohl said this: “Spider-Man Turn Off The Dark is ten-times more complicated to tech than anything else, and the preview schedule allows for only very limited rehearsal time (twelve hours per week). We simply need more time to fully execute the creative team’s vision before freezing the show. I picked a date in March that allows me to ensure that this will be the final postponement.”

I certainly agree the show has amazing tech going for it and it needs time to work that out. But there’s more than refining the tech it would seem. Just two weeks ago a new ending was put in, with an all new flying sequence. This also connects with reports that have been coming out from critics who’ve sampled the show early that the story is a mess. Those same reports say that the music from U2 isn’t all that great either (in fact U2s usual album producer was recently brought in to help with the music).

Uniformly what I’ve read in the press and from people on Twitter who have seen the show is that tech (from sets to costumes to lighting to all the aerial work) is incredible. It’s the stuff that should be more under control in a show that’s been in development for eight or nine years that’s lacking. I don’t think the producers are wanting to admit this, and I think it’s why they are so adamant at keeping critics away for as long as possible. MTV has one of the best reviews out there so far with Five Things We Liked and Five Things We Hated.

Not only did Cohl not really discuss tweaking story and songs, but while I was at the box office two weeks ago I heard one of the ticket sellers explaining what previews meant to someone who didn’t know. The box office worker only talked about the tech side. There was no mention that there are still elements of story and songs still being worked on and that the show they paid $140 today could be rather different in a day or two or ten.

I normally think previews should be allowed to run their course. Most musicals spend four to six weeks in previews to solidify in front of an audience before the critics come. You need that to find your pace and find what works in front of an audience.  Spider-Man, if it opens with its March 15 date, will spend around 15 weeks in previews. Even the NYC Department of Consumer Affairs was concerned and reviewed Spider-Man advertising to make sure it was clear that it’s in previews (although I’ve seen an ad on SyFy just this last week that implied it was open with the simple tagline of “now on Broadway.”). I think it’s completely appropriate at this point for critics to weigh in on what people are shelling out so much money for. Review it now and after official opening. It could make for an interesting compare/contrast.

We’ve exchanged our tickets to see it after opening. When we bought the tickets in early December, the opening was set for January 11. We were fine staying on today’s date when the show was opening February 7 because by the 30th the show should’ve been locked because the reviewers would start being invited. But once it moved to March 15, we wanted to exchange. As fascinating as it might be to watch some scenery not work or someone get stuck in the rafters during a flight sequence there’s also the horrific possibility of watching someone get severely hurt (as happened on December 20 when an actor fell 30 feet due to disconnected safety line). Plus, even for $99 per ticket, we don’t need to be a part of the creative team working out their story and music issues. Now we’re going in early April.

It’s important to note that in most cases I’m fine going to a preview. In fact, I’ve seen many shows in their first preview performances, the most recent being In The Heights. I’ve never witnessed a show stop a performance during a preview or seem like anything other than what the show was supposed to be. It’s usually easy to get tickets on tkts during previews too so you can see the show for half the cost. Sure, many shows go out of town to try out… but not all do any more because of economics. Spider-Man says this show couldn’t go out of town because of all the effects and, again, I understand that. But it doesn’t excuse what might turn out to be poor writing.

As far as I’m concerned effects and spectacle only get you so far.

I need only look at the other Julie Taymor-directed musical I’ve seen to illustrate my point. Yes, The Lion King is a huge hit. You can’t call a show that won loads of Tonys and has run for over a decade anything but a hit. For me, however, it’s a disappointment. While the “Circle of Life” opening is one of the most spectacular and moving pieces of theatre I’ve ever seen and the use of puppets and masks is extraordinary throughout the production, I find the overall show a bit boring. The Lion King is among my favorite Disney animated movies, but the 90 minute film was expanded into a 2h 25m show. Those stretch marks showed and made it a show I don’t need a repeat visit to.

Spectacle when combined with strong story and music can be soul stirring. I’m thinking shows like Wicked, The Phantom of the Opera and Les Miserables. These shows I can see again and again and be throughly entertained.

Well see what happens when I finally get to see Spider-Man: Turn Off the Dark. I really want to be dazzled. It’s possible they’ll fix it in the next six weeks. It’s possible it could suffer a Nick & Nora fate and close right after opening (though that seems unlikely because the box office seems strong even with all the issues swirling around the show).