It Gets Better Goes From Video to Book 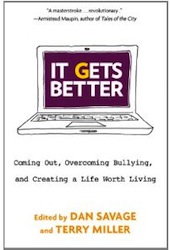 Last night I was at the Barnes & Noble in Tribeca for the first stop on the book tour Dan Savage and Terry Miller are on for It Gets Better: Coming Out, Overcoming Bullying, and Creating a Life Worth Living. Yesterday also happened to be the book’s release day.

It was an inspiring evening as Savage and Miller talked about the genesis of the project and read from their introduction and epilogue. They also introduced five special guests of people from New York whose stories have been included in the book. I wrote up the event for LambdaLiterary.org and you can read all about the evening here.

Besides all the proceeds from the book going to the youth charities the It Gets Better Project supports (The Trevor Project, GLSEN, the ACLU LGBT Project), they’ve set up a way for people to buy books and get them donated to the school or library of their choice. If you’re interested in participating in that, check out the donation page on the It Gets Better site. It’s a great way to spend $25.

I’ve featured a few It Gets Better videos on the site in the past (including the one I took part in with my Braking the Cycle family), here’s a brand new one from the cast of the just-opened Broadway musical Priscilla: Queen of the Desert. It’s the first video produced to be aired on national television as a public service message.