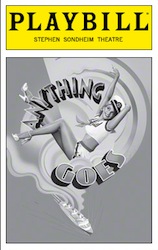 A classic revived beautifully is a wonderful thing and the just-opened Roundabout Theatre Company’s production of Anything Goes is exactly that. The company, led by Tony Winners Sutton Foster and Joel Grey, is outstanding in this highly polished, madcap comedy that is peppered with Cole Porter standards.

I admit, when I first heard that Foster was cast as Reno Sweeney I didn’t think it was quite right. This is a role that’s been done–and done well–by the likes of Ethel Merman, Patti LuPone and Chita Rivera. Reno is a brassy 30’s broad. I think of Foster more as the young, perky ingenue. She tackled Reno with gusto, attitude and just the right accent that made it work.

Of course, the centerpiece of Anything Goes is Cole Porter’s songs. It was fantastic hearing Foster wrap her voice around classics like “I Get a Kick Out of You,” “You’re the Top,” “Friendship” (which was a fun duet between her and Grey), “Anything Goes” and “Blow, Gabriel, Blow.” Laura Osnes, who is the ingenue here, does “It’s De-lovely” and “Goodbye, Little Dream, Goodbye” beautifully. In the role of the man in love who gets caught up in gangster activity, Colin Donnell holds his own well with Foster, Grey and Osnes and delivers some great songs of his own. Joel Grey (who, as he nears 80 years old, is doing double duty performing here and directing the soon-to-begin The Normal Heart) is fun as the bumbling gangster.

Kathleen Marshall directed a tight ship here and brought out some wonderful choreography as well. The big numbers in the show–“Anything Goes” at the end of Act I and “Blow, Gabriel, Blow” mid-way through Act II–are showstoppers. The show also knows how to take it slow with a beautiful waltz sequence as part of “It’s De-lovely.”

This show is simply a lot of fun. You can’t help but leave the theatre with a smile on your face and humming a great song. Check out the video below and you’ll get an idea of what’s going on at the Stephen Sondheim Theatre eight times a week.