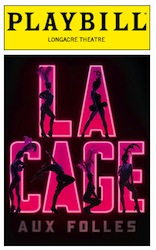 I am so glad we made the decision to see La Cage aux Folles with Harvey Fierstein and Christopher Sieber. I see now what a wonderful show this can be when done right. We saw the 2004 revival and the show felt mediocre but had a couple of really good songs. While the current revival has been open for just over a year and received good reviews, I wasn’t interested in seeing Kelsey Grammer in the lead. When it was announced that Fierstein was taking over, in the play he’d written some 28 years ago, I knew it was time to go. When Sieber joined the cast too, that was icing on the cake (he took over from Jeffrey Tambor who bowed out after just a handful of performances).

The plot of the show is well known–the son of Georges (Sieber) and Albin (Fierstein) is engaged to the daughter of an arch conservative. Problems arise when the conservatives want to meet the parents of the soon-to-be-groom. After trying to hide Albin, the secret ends up revealed and a bit of comedy that lands between slapstick and farce ensues. 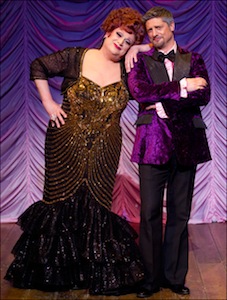 Sieber and Fierstein take this story to new levels of emotion. Their chemistry is flawless as a couple who’ve been together for 20 years. They’ve got all the subtle looks and gestures you’d expect of a long-time couple. When Albin is hurt by the efforts to hide him, you see the pain across both men’s faces as they struggle to find the middle ground to make their son happy. “Song on the Sand” is such a beautiful number between these two and plays as a testament to their love and devotion.

Fierstein, who I’ve heard sing in Hairspray and A Catered Affair, has never sounded better. With his gruff speaking voice, you don’t expect him to posses a strong singing voice. I was amazed how he moved from the full force of “We Are What We Are” in the opening number to a subtle and powerful “I Am What I Am” and then to “The Best of Times” that started out with a softness that built into a joyous anthem.

It was great to see Sieber here. He’s one of our favorite actors (we last saw him in The Kid). He was excellent in the less showy role of Georges. His other solo number, “Look Over There” (where he tries to explain to his son the damage he is doing by excluding Albin), was outstanding. I have to give a shout-out to Wilson Jermaine Heredia, the original Angel in Rent, who plays Jacob, the over the top “maid.” He was tremendously funny.

La Cage is only around until May 1. If you’re in the NYC area go see Fierstein and Sieber give an outstanding performance. You will not be disappointed.