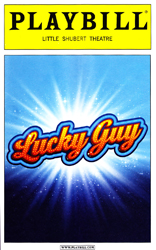 We’ve kept an eye on Lucky Guy since we’d first heard about it. The show sounded fun and it had actors in it that we liked. When the show announced a pre-mature closing last Thursday (after only being officially open for a week), we went to tkts on Friday to pickup tickets for today’s matinee. I’m so glad we did because this show was a great time. It’s also a text book example of a good show just not catching an audience.

The show’s premise is simple. Billy Ray is a simple boy comes whose come to the  big city (Nashville) because he won a song writing contest. The record company he’s supposed to record with might get foreclosed on because G.C., the company’s owner, is on the verge of not being able to pay his last mortgage payment to his cousin, Big Al. That’s just fine with Big Al because he wants to put his sixth use car lot where the recording studio is. Once Big Al finds out that Billy Ray’s song could save the studio, he get his partner in crime, the queen of country music, Miss Jeannie Jeannine to steal the song. In the middle of all this, Billy Ray also falls in love with Wanda, the secretary at the recording studio. 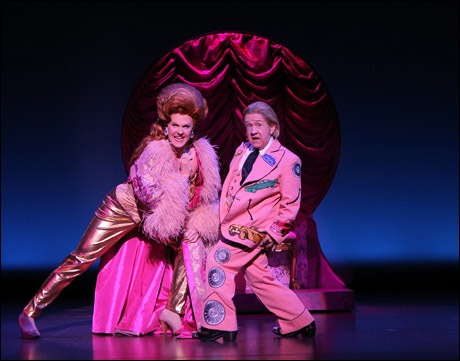 The plot moves at a madcap pace, punctuated with fun, toe-tapping songs. The flavor of the show is set up front by the Buckaroos who serve as backup singers, dancers and occasional narrators. These four cowboys, knock out some great choreography from A.C. Ciulla (Broadway’s Footloose and TV’s So You Think You Can Dance). As for the villinas, portaryed by Lelise Jordan (best known for his Emmy-winning role on Will & Grace) and Varla Jean Merman, Jordan accurately summed up their characters in an interview calling them “Boris and Natasha.” These two are awesome playing off of each other. 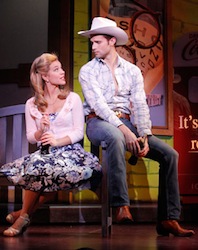 Kyle Dean Massey as Billy Ray is the heart and soul of the show. We first saw Massey in Next to Normal and became fans. He’s terrific in here. He croons the country-tinged songs great. He gets to bust out some great dances and as the romantic lead he is completely charming. He wins the audience over within seconds of walking on stage. His leading lady, Savannah Wise, is also delightful as she struggles to stand by her man while he’s being potentially lured over to the dark side of show business.

It’s unfortunate this show didn’t catch on. It seemed to have a perfect mix of elements–a fun story, great music and dancing, wonderful cast and in a small, but well-located off-Broadway theatre. But it just didn’t catch on. The theatre was only about one-quarter full, despite this show’s marketing campaign that had TV commercials and taxi-cab toppers.

Word is there will be a cast album, which is good news. Here’s a few looks at some of Lucky Guy‘s numbers along with its very cute TV commercial.