Season 8 of So You Think You Can Dance has been rolling for a few weeks now with a couple weeks of audition shows followed by Las Vegas callbacks this past Wednesday. Last night the Top 20 were revealed and it looks like it will be an incredible season.

It was a disappointment that Natalia Mallory (sister of Top 20 member Sasha Mallory) didn’t make it. She was such a highlight of the auditions and Vegas. I hope she tries again in the future. The other one I’d hope would make it was Jeremiah Hughes. He was great in Vegas and it seemed like he was on the road towards the Top 20.

That said, I don’t know who I would want to cut to make room for those two either. The top 20 is a great, diverse mix of dancers and I’m looking forward to seeing what they can do this year. 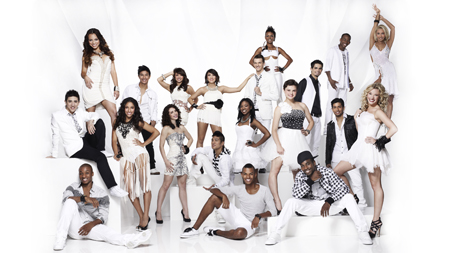 The Top 20 reveal show offered up some incredible performances, which only fuel my excitement for this season. Not one of the nine performances failed to impress. Here’s a look at the dances:

So who are my early favorites? On the guys side, I’m already a fan of Jess, Nick, Robert and Marko. For the girls it’s Sasha, Iveta, Melanie and Jordan.

A note on the judges… I’m sad that Mia Michaels isn’t judging. I loved her honesty on the panel. I know she’s choreographing the Rock of Ages movie (which Adam Shankman is directing), but I’ll miss her behind the desk. Hopefully she’ll get to choreograph a dance or two this season. Mary’s been a mixed bag so far. On the audition tour and Vegas, she was mostly controlled. But she let loose with a few screams last night and I’m not a fan of that. I am happy to see that Lil C, Jason Gilkison and Toni Redpath will slip into Adam’s chair while he’s out filming. I’m less excited about Tyce and Robin Antin in that chair.

At least from the dancing perspective, it looks like it’s going to be a great season!