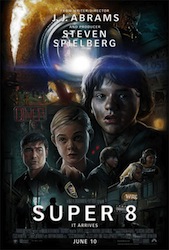 Sometimes a movie’s trailers can ratchet up expectations so high that the movie falls flat.

I’m happy to report that Super 8 lives up to every expectation its trailers created and then exceeded them. Its style reminds me of the awesome genre movies I grew up with–solid story, characters you cared about, cool effects that didn’t take over the movie. It’s up there with E.T., Close Encounters, Star Wars and some movies outside the genre like The Sandlot, Radio Flyer and Stand By Me.

Kudos to J.J. Abrams for taking the best of his childhood and mixing it with his love of monster movies (there are some shades of the awesome Cloverfield in here too). He assembled a perfect kid cast too: Joel Courtney, Riley Griffiths, Gabriel Basso, Elle Fanning and Zach Mills are outstanding as the small town kids who witness an air force train crash while shooting a super 8 movie. Kyle Chandler is also top notch as the town sheriff and recently widowed dad.

I’m saying nothing more about that plot than what the trailers have revealed. Go see the movie and take the ride for yourself (remember the days when we could do that because there weren’t spoilers around every corner of the Net). Stay for the credits too because the movie the kids made plays while the credits roll. That was a nice touch to end a perfect summer movie.