The Curse of the Dragon God by Geoffrey Knight 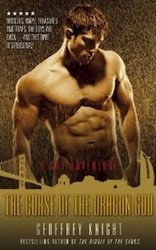 Geoffrey Knight tops himself with the third book in the Fathom’s Five series, The Curse of the Dragon God. In the previous two books, the team has had to find various artifacts and usually only save each other or close friends. In Dragon God, the stakes are much higher as the team has to essentially save the world. With this book, the story shifts from more of an Indiana Jones feel to something more akin to James Bond or Alias.

This time out the team is working to help one of Professor Fathom’s oldest friends, who is the CEO of a major diamond operation in China. In short order the professor and his friend are kidnapped, one of the team is seriously injured and the other four end up spread out trying to sort out what’s going on.

As usual I’m impressed with how Knight balances the action of the characters spread out in different locations. The villains in this book are exactly like ones you see in the Bond stories too… it takes a lot, and I mean a lot, to stop them. I love that nothing is easy for the Fathom team and at the same time I love their attitude about the problem. They just keep on going until they take care of business. The last third of the book was like a roller coaster ride as the team pulled out all the stops to avert catastrophe. Luckily I had the luxury of a day off so I didn’t have to put the book down.

There are a couple of major, and surprising, plot twists in the story which just added to the fun, and my inability to set the book aside for even a moment yesterday afternoon.

The last few pages of Curse of the Dragon God set up The Temple of Time, which is slated to be book four. Hopefully the wait for book four will be less than the gap between two and three because I’m eager to see what’s up next for Fathom’s Five.