Four new choreographers made their So You Think You Can Dance last night, representing six of the nine dances last night. While sometimes new choreographers are exciting, such as when Travis Wall made his debut a couple of seasons ago, this time out it seemed like most of the choreography was not to the standard I expect from the show. New is good, but there should have been a better balance between the new and the tried and true.

Meanwhile there was good and bad on the judging panel this week too. Having Travis on the panel was great, although it was odd since just the day before I read an interview with him on AfterElton where he said “I don’t think I could ever be a judge.” Carmen Electra, on the other hand, didn’t do much on the panel. Her comments were just kind of empty to me. It was also odd that she wasn’t there for the results show (and it wasn’t even mention as to why that was).

Anyway, on to the dances. I was worried for a while that I wouldn’t end up with a top three for the night, but it all came together by the end of the show. 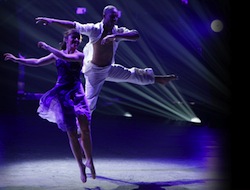 Caitlynn & Mitchell (Contemporary by Mandy Moore): Leave it to a veteran SYTYCD chroeographer to cap the night with the dance of the night. This was simply stunning with such grace and emotion from the dancers that you couldn’t help but be blown away by everything about this dance.

Melanie & Marko (Jazz by Ray Leeper): This has a certain ballroom paso doble quality to it that I liked because of its drama and power. As always Melanie and Marko had excellent chemistry and performance and nailed all the moves they were asked to do. My one complaint is that there was a portarit quality to this, which Leeper said he was going for during the package piece. I tend to like more transitions, but that issue didn’t take away from the entertainment value of this dance. This was also the best from the new choreographers. 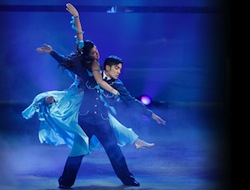 Jordan & Tadd (Smooth Waltz by Toni Redpath): I love a good waltz and Toni has created some great ones on SYTYCD.  Its musicality and flow was gorgeous and it’s story of a siren calling out to a man was cool. Jordan, as usual, displayed wonderful lines. Meanwhile, Tadd, once again very outside his Hip Hop style, was so impressive. He makes it look effortless. His partnering was stunning as well. Hip Hoppers don’t do these sort of lifts at all and he nailed every one of them.

I actually don’t have a number that I disliked enough to put at the  bottom of my list for this week, so on to the rest of the couples dances in the order that they were performed.

Sasha & Alexander (Hip Hop from  Shaun Evaristo): Newcomer Shawn didn’t do these guys any favors last night by offering up a simplistic Hip Hop number. It struck me as something from the 80s that you’d see in a DeBarge video. It was cute, but that’s about all you can say about it. Unfortunately, Sasha and Alexander, who I like a lot, didn’t seem to connect with the piece either.

Clarice & Jess (Contemporary by Justin Giles): This is my favorite dance from this couple so far. They seemed to really connect on the chemistry after some earlier misfires. Plus, Jess lost his Broadway-face and seemed to put on something more real. Hopefully this is a turning point for them. This was almost more of a lyrical hip hop than contemporary to me because there was so much locking and punctuated movement happening.

Ashley & Chris (Salsa by Liz Lira): This was so entertaining and I both dancers had moments of excellence. However, it wasn’t a flawless salsa either as occasionally the mix of energy/sexiness had lapses. Still, I liked this a lot. Kudos to Chris too for pulling off some complex partnering.

Ryan & Ricky (Jazz by Chuck Klapow): This is my favorite number from these two so far. I think it worked for them  because it didn’t require an emotional connection between them. Technically they performed it very well, although I think Ryan out powered Ricky in some of the moves and embraced her zombie character a bit more.

There were two group numbers this week too:

Boys Group (Contemporary by Justin Giles): This number never seemed to really start. There was a little extra energy in the middle, but it never really got off the ground. I blame the choreographer for that because the guys were doing everything they good to sell this piece with some solid moves.

Girls Group (Jazz by Ray Leeper): This is the best of these competition day group numbers that we’ve had this season. I loved the powerful, sexy, very Fosse-esque style of the performance. The ladies really knew how to work this piece.

Results show: Eliminations are definitely getting harder. After watching the Wednesday’s show I felt like Ashley & Chris were in the most danger because they got the worst reviews and did, even though I liked it, had the weakest number. That proved itself to be true as they were eliminated.

Ashely didn’t do herself any favors during dance for your life as her routine was underwhelming compared to Ryan and Jordan. On the other hand, I think Chris should’ve been saved and Ricky should’ve gone home. Nigel was right that he’s not connecting with the audience, and his solo was lackluster too.

I was sad that Jordan and Tadd, after such a stunning routine, were bottom three. But, considering the stregnth of the other numbers, I don’t know who should’ve been slotted there instead. The upside was getting to see Tadd do a solo.

Performances were okay last night. It was my first time hearing Florence and the Machine. I’m going to have to check out more from them. The guest contemporary ballet company didn’t blow me away, which was disappointing. The group Bollywood number at the top of the show was quite spiffy!