Since I ended up and watched the performance and results show in the same night, let’s just start with the massive disappointment in the results show.

I’m stunned and dismayed that the public kept Ricky out of the bottom two. Maybe it was a sympathy vote since the judges delivered tough, but quite accurate, critques. Instead, Jess and Tadd ended up in the bottom two. Given vote foul up, I think they made the right choice sending Jess home,  but that should’ve been Ricky. Boo to the voters who let that happen. On the girls side, the judges simply made a poor choice. Jordan has been so stellar and to see her out this week over Caitlynn just didn’t make sense to me.

This week’s show was stellar, and contained three of the best dances of the season so far: 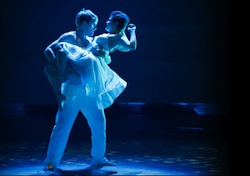 Melanie (partnered with all-star Neil, Contemporary by Mandy Moore): Simply breathtaking. This number, done to Bonnie Tyler’s “Total Eclipse of the Heart” was one of the most amazing pieces not only of the season but in the history of SYTYCD. The movements were graceful, fluid and quite powerful. Melanie’s running leap into Neil’s arms was spectacular.

Melanie & Sasha (Jazz by Sonya Tayeh): Sonya rolled up some quirky and powerful choreography for these two amazing women. They stepped up and knocked it out of the park with some precise musicality and fierceness. These two are the top two, no doubt about it. 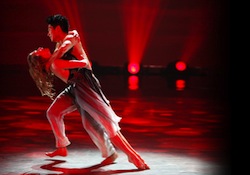 Marko (partnered with all-star Allison, Contemporary by Sonya Tayeh): Sonya delivered a one-two punch Wednesday night. This is one of the most emotional dances ever on the show. Marko and Allison had the perfect chemistry and character for the performance. For Marko it was made all the more powerful because his mom was in the audience. This was perfection.

Here’s a fast look at everything else the show had to offer:

Sasha (partnered with all-star Pasha, Quickstep by Jonathan Roberts): Jonathan delivered a perfect ballroom moment for Sasha with this quirky take on the quickstep.

Caitlynn (partnered with all-star Ivan, Hip Hop by Marty Kudelka): I loved the dance and I loved Ivan (I’ve never seen him before as I missed his season). Ivan moved so smooth and he completely out-danced Caitlynn. I loved this performance because of him.

Jordan (partnered with all-star Ade, Jazz by Tyce Diorio): Great, fun, technically complex, energetic number with some crazy lifts. Ade’s picking up Jordan and passing her behind her head was amazing (and I wish the camera angle on it had been better).

Ricky (partnered with all-star Anya, Jive by Jason Gilkison): This was enjoyable and Ricky did a decent job at not being overshadowed by Anya. He did, however, have a clunky lift in there. And I don’t ever need to hear Celine Dion sing “River Deep, Mountain High” again.

Jess (partnered with all-star Lauren G, Lyrical Hip Hop by Tabitha and Napoleon D’umo): Jess has really grown for me because of his hip hop numbers. This was excellent and I loved the chemistry between him and Lauren.

Tadd (partnered with all-star Lauren F, Jazz by Mandy Moore): Mandy also delivered a one-two punch. This number was a super fun cat burglar piece. Tadd was incredible here as he lost his hat and got punched in the face by Lauren. Through it all he never missed a step and delivered a great performance.

Caitlynn & Tadd (Foxtrot by Jonathan Roberts): Another shining moment for Tadd as he shows he can be smooth in the ballroom. Caitlynn was very sparkly and graceful. It was a good number for both of them.

Ricky & Marko (Hip Hop by Tabitha and Napoleon D’umo): Super fun hip hop, which really helped show Marko’s range given the seriousness of the piece he’d done minutes before. Ricky’s did the dance well, but his character didn’t really need to shift from the jive.

Jess & Jordan (Rumba by Jason Gilkison): If there was a clunker in the show, this was it. While it was danced technically quite good, and Jess finally nailed his lifts, the chemistry was non-existent. This is probably the number that caused Jordan to get eliminated over Caitlynn.

Results Show Tidbits: The opening group number from Tyce was the best group number so far this year. Quite stunning. The LXD were AWESOME! Lady Gaga was AWESOME (and it’s always good to see SYTYCD-alum Mark right there with her)! The results, as discussed earlier, were a disappointment.