It was a weird performance finale for So You Think You Can Dance Each of the four finalists had at least one shining moment as well as one clunker. It was good that the clunkers were balanced between the four. It’s still disappointing, however, that there were clunkers since they could have been avoided altogether if the choreographers did a better job and the producers were more thoughtful on what dance styles they put into the finale.

Yes, SYTYCD prides itself on the diversity of its styles. However, there is no reason to put the season’s only disco number into the finale. The same goes for Gumboot. I’m not saying don’t challenge the dancers. The finale should be rigorous, but don’t stray into territory where you can kill a dancer’s chances based on dance style alone.

Who is going to win? This season I think any of the four would be a great choice. I admit that all my voting went to Marko because I was annoyed by Nigel’s comments that  a girl would win–this coming after the guys got stuck closing the show with the Gumboot routine while Melanie and Sasha got to do a stunning contemporary piece. My guess is it goes down like this: 4th place is Tadd, 3rd place is Marko, 2nd place is Melanie and 1st place goes to Sasha. The girls could easily flip-flop positions though. 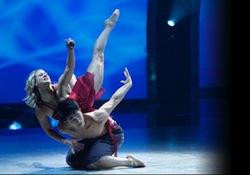 Marko (partnered with all-star Lauren, Contemporary by Tessandra Chavez): In his style, Marko is a powerhouse. This emotion-packed number was full of technically challenging moves that demanded a lot of character and Marko and Lauren delivered. The musicality displayed here was incredible, not to mention the stunning lines these two pulled off. 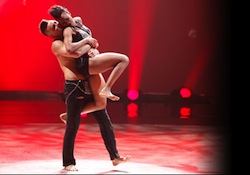 Sasha (partnered with all-star Mark, Jazz by Sonya Tayeh). This was a match made in heaven. Sasha is a fantastic dancer to give to Sonya. Mark is also one of the best interpreters of Sonya’s work. Putting everyone together made a masterpiece. Sasha got to show her warrior princess side one more time, and the best of the season. And Mark, he was awesome as usual…and just plain hot too! 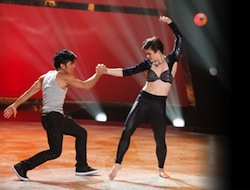 Melanie & Tadd (Jazz by Ray Leeper): Ray knows how to play to his dancers strengths. Even though this is a jazz number, he gave Melanie a lot of contemporary-looking moves and Tadd got to use some of his b-boy moves. This was a fun number that gave both dancers some meaty characters to play too. This is exactly the kind of number that belongs in a finale.

Here’s the rundown of the rest of the show, in the order that it happened:

Marko & Melanie (Disco by Doriana Sanchez): Marko and Melanie got to start the show with their clunker performances. What a shame they got stuck with the disco. Most SYTYCD dancers struggle with disco, some pull the performance off better than others. For the first time these two struggled with a dance. It was sad to see them have to get stuck with this in the finale. Thankfully, the both got to put it behind them later.

Tadd (partnered with all-star Joshua, Hip Hop by Lil’ C): Terrific number, but I would’ve like to see more intricate choreography for them to do. Fantastic to see Tadd work the stage so well with former winner Joshua.

Melanie (partnered with all-star Robert, Contemporary by Stacey Tookey): Absolutely gorgeous. In the same way that Sonya knows exactly how to work with Sasha, Melanie and Stacey are a perfect match. It was a stunning piece of choreography that Melanie and Robert were fantastic in.

Sasha & Marko (Broadway by Spencer Liff) Completely adorable. Sasha is the strong, confident, elegant lady and Marko the dorky, shy waiter. She wants him and he doesn’t know what to do with it. Strong characters and stylish Broadway moves were on display. Marko’s jump onto Sasha and then falling straight to the floor was impressive.

Melanie (Solo): Once again she impresses with a beautiful solo, full of exactly what she does best. I’d love to see her come back and choreograph in a future season. She does so well for herself, it’d be great to see what she’s give someone else.

Marko (Solo): Marko’s musicality is always impressive. He also delivers so much soul in 30 seconds. I’d love to see what he’d do with more time.

Sasha & Tadd (Cha Cha by Mark Ballas): Here’s another clunker of the night. Mark did a disservice to both of these dancers, handing over a piece of choreography that seemed to not take into account either of their strengths. Tadd has risen to the occasion so often outside his genre, but this just didn’t work. Even Sasha faltered a bit here. So disappointing to see that happen in the finale since Mark could’ve built a cha cha where the could’ve both shined.

Tadd (Solo): Tadd manages to not only rock some b-boy moves, but he also works in nods to other styles in his solos. Tremendous fun to watch him do his thing.

Sasha (Solo): Her solo’s remind me so much of Ellenore from Season 6. They’re fun, a touch quirky and show just how well she can move her body.

Sasha & Melanie (Contemporary by Stacey Tookey): What a beautiful number to close out the performances for these two amazing women. The piece was haunting, yet powerful for them. Stacey crafted a number that let them shine individually and as a pair. Absolutely incredible.

Marko & Tadd (Gumboot by Chuck Maldonado): This had no business being the final number in the show. The guys gave it their all, but this piece of choreography can’t stand in comparison to the strong work that Stacey gave to the girls. Gumboot should really only be done in a group setting where you can hear the stomp of the boots on the floor, it shouldn’t be two people with no way to hear the stomps. A clunker way to end the evening.

I came close to getting the top 4 ordering completely right. Sasha and Melanie did a flip-flop. I thought Sasha might edge her out because of the emphasis that kept getting placed on her story. In the end, it doesn’t matter–a fabulous dancer won and the entire top 4 were incredible.

The results show was great. The judges picked perfect numbers to be revisited. The tap number with Matt Flint along with Nick & Jess was very cool. It was a perfect end to a remarkable season.