Yesterday morning I did the final training ride ahead of this year’s Braking the Cycle. It was a fairly easy 40 miles, 30 of which were done in Central Park.The ride was the culmination of a few months of training that I’ve done with Joey and Kip to get better prepared for the ride.

The training apparently paid off in several obvious ways.

1) This one I noticed yesterday morning. The hill at the northwest side of the Central Park is one that I used to be able to climb between 5.5 and 6 mph. I’d usually end up winded doing it. Yesterday morning though, in the five laps we did, I was doing that between 7.5 and 8 mph with no signs of being winded.

2) We made several runs out to Piermont and Nyack this summer and each one of them got faster. There’s some decent hill climbs through this area, especially when you dip into Palisades Park, so that gave us a good challenge. The best time for this 60 some miles was 4h 15m, and when we built in three rest stops (one that was extended because of the yummy food at Bunbury’s), we’d basically be done in about 5h 30m. These times are great. We capped off the Nyack runs last weekend with two runs–one on Saturday and one on Monday so we’d have some close together, distance rides.

3) My “cruising” speed is much faster than last year. I wasn’t doing much more than 10 to 11 mph last year, I might hit 12 occasionally. Now, I can sustain between 15 and 17 mph on flats and not feel too bad doing it. Even simply moving at a relaxed pace, I’m tending to be at 13 mph.

3) Looking back at last year’s training log, it’s clear I’ve trained better and more efficiently this year. First off, we’re a week out from the ride and I’m not completely sick of my bike, which I was last year. My total mileage from March through the first week of September this year is 1,622 miles compared to 1,893 miles in 2010 (that’s a 14 percent drop in miles). However, the distance of the training rides were farther and better, because of the hills). I’ve had at least two 50 mile plus rides per month since June. Last year there were two 50 mile rides in total. There were lots of small rides, this year it was about longer and hillier rides. I think this will help a lot.

I can’t thank Kip and Joey enough for including me in their training runs. I’ve had a blast with them and, just like the help they gave me in day 2 of the ride last year, I’ve become a better rider working with them. 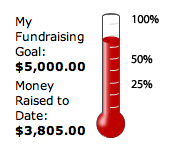 I’m still working on fundraising this year. I won’t stop with that until I get to Boston on Thursday. As I write this, I’m about $1,200 away from the $5,000 I want to make in my personal rider account. I know some funds will come in this week to boost this figure a bit. I’ve also contributed funds to The Flying Goats team account from some cash proceeds I’ve taken in this year (those go to the Goats fund because the team can get cash matched, and it’s good to get cash doubled!). Between bingo, royalties and a scrimmage that Jacob put together to benefit my ride, I gave about $750 to the team…which turns into $1,500. The fund raising season has been a success. That doesn’t mean I don’t want to get more into my account, so if you’d like to donate please click here to go to my donation page.

Many thanks to every who has donated so far. There’ll be a big thank you post when the ride is over next week.

The next few days are devoted to taking care of a few final pieces. My bike went into the shop yesterday for a tune up to ensure it’s fully ready to go. I’ll pick it up on Monday evening (which sadly means a subway commute on Monday). Wednesday morning I drop off the bike so it can be shipped to Boston. Thursday afternoon I board a bus to get myself to Boston. Friday morning the ride starts.

Day 1 will be very different for me than last year. I was asked to co-cobose for Day 1. It was a request I couldn’t say no to. This means, along with my co-cobose, I’ll be at the end of the ride all day. We make sure that no rider is left behind, call in every 30 minutes or so to let the coordinators know where the end of the ride is and make sure the riders at the back of the ride feel supported as they make the journey. I was honored to be asked and I look forward to helping out with the ride in this way.

Thanks to everyone who has supported me in this endeavor for my second year. I’ll be updating via Facebook and Twitter along the way, plus posting photos to Flickr and blogging to some degree in the evenings.