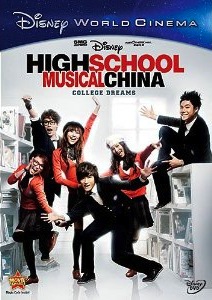 Saturday night there was no scheduled hockey game, so I was home and Will and I had the chance to watch a movie. There was nothing exciting on HBO/Cinemax/Showtime/Starz so I took a tour of what was available On Demand.

I had no idea I’d come across High School Musical China: College Dreams.

I guess it shouldn’t be a surprise that Disney has taken the High School Musical franchise global to allow for local versions. It was cool to see it available locally and, of course, we ordered it since we both like the series.

It was a fun movie. It was subtitled so we could follow the story, which held loosely to the American original. Basketball player and good student Poet wants to sing, but his afraid he’ll be made fun of. New girl Ning Ning is a brain and her parents want her to focus on her studies rather than boys or singing. Yuan Yuan is the resident diva and wants to be the only girl in the spotlight. Rather than trying to put on a school musical, this group is trying to make it in a regional school singing competition. The movie closes with its own version of “We’re All In This Together” with vastly different lyrics but the same music.

It was a great way to spend a Saturday night. The movie, out on DVD last month, is available On Demand on cable systems across the country and is available streaming from Amazon.

Here’s the trailer so you can see just a little bit of the HSM fun.